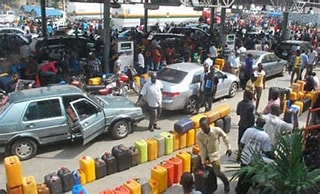 There appears to be no end in sight of the fuel shortages in Africa’s third largest oil producing nation, Nigeria, as Nigerians continue to form large queues at fuel stations.

Last Friday, there were long queues at most fuel stations across the West African nation with the situation in Lagos being the worst, according to reports by local media.

Amidst the fuel scarcity, local reports suggested that some stations increased the price of petrol to N185 per litre without official notification.

According to a report by News Agency of Nigeria (NAN), some of the stations like Mobil, Conoil, TotalEnergies, Nipco, Enyo, Forte and NORTH-WEST adjusted their pump price to reflect N185 per litre against N169 previously.

“Motorists who queued for several hours at filling stations operated by major marketers in Lagos were shocked to notice the adjustment of the pump price.

“Many major filling stations in the Lagos metropolis, especially Ikeja and Agege areas were not dispensing. Only a few stations were dispensing while motorists scrambled to fill their cars,” the report said.

While some marketers sold Premium Spirit (petrol) at N185 per litre, the report said some independent filling stations were rather selling PMS between N260 and N270 per litre along Ikorodu, Somolu, Bariga, Ikotun and Akran, Awolowo road.

The report said sources within the marketers indicated that the Federal Government had begun the subsidy withdrawal, urging marketers to adjust their pump price.

The marketers claimed that the government may have commenced a gradual removal of the petrol subsidy.

The issue which threatens the country’s economy has become a major concern to many Nigerians, thereby, generating discussions on both mainstream and social media platforms.

It is not yet clear what measures the country is putting in place to tackle the issue.

Meanwhile, the Minister of State for Petroleum Resources, Chief Timipre Sylva, has denied claims that the Federal Government had approved increment for PMS.

“President Muhammadu Buhari has not approved any increase in the price of PMS or any other petroleum product for that matter.

“There is no reason for President Muhammadu Buhari to renege on his earlier promise not to approve any increase in the price of PMS at this time.

“This is not the time for any increase in pump price of PMS.

“I appeal to Nigerians to remain calm and be law-abiding as the government is working hard to bring normalcy to fuel supply and distribution in the country,” the Minister said in a statement as carried by Punch.