The Bulk Storage and Transportation Limited Company (BOST) has commenced the distribution of exercise books to 32 basic schools in the Central Gonja and Sevelugu districts in the Savanna and Northern Regions as part of its Corporate Social Responsibility (CSR) to those communities.

According to BOST, these communities are socially impacted by their operations and activities in the country.

BOST currently has one of its busiest depots in Buipe in the Savanna Region and a Booster Station in Savelugu in the Northern Region.

Thus, over years, the company took cognisance of the lack of adequate learning materials in schools around these communities.

BOST, therefore, decided to provide much assistance in this regard to support families by providing their wards with exercise books to aid their academic development. 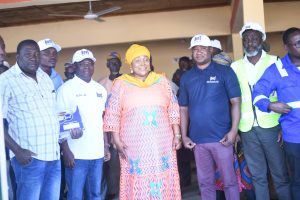 Eight more schools in the Debre area are also scheduled to receive their share of the exercise books by this weekend.

Other schools in the company’s impacted areas in Bolgatanga in the Upper East, Kumasi in the Ashanti, Accra Plains Depot (APD) in the Greater Accra, Akosombo in the Eastern, and Mami Water in the Volta Regions are all due to receive theirs as the exercise progresses.