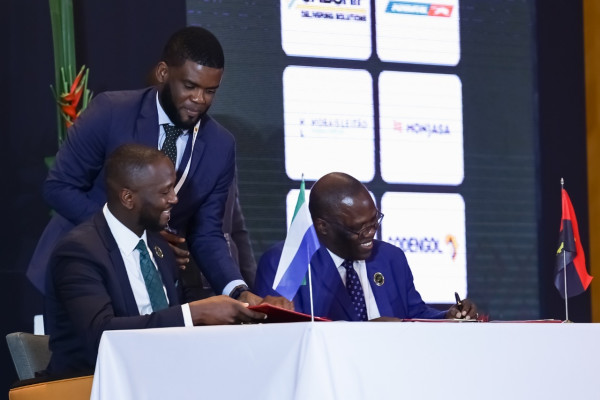 This is with a view to establishing a shared commitment to promoting and intensifying collaboration across the oil and gas sector.

The MoU was signed by Paulino Jerónimo, President of the ANPG, and Foday Mansaray, Director General of Sierra Leone’s Petroleum Directorate.

The Memorandum of Understanding serves to outline opportunities for bilateral trade and investment; position oil and gas cooperation as mutually beneficial economically, technologically, socially and environmentally for both countries; and reaffirm stronger economic, cultural and social ties between Angola and Sierra Leone.

As the largest oil producer on the African continent, Angola has been on a path of fostering pan-African energy diplomacy, executing diplomatic visits to and signing a series of cooperation agreements with new and existing hydrocarbon producers across the region. These agreements have targeted policy alignment, knowledge sharing and enhanced trade and investment across energy and non-energy sectors like.

“The MoU signals new opportunities for bilateral cooperation across the trade, energy and economic sectors between Angola and Sierra Leone. We are proud to collaborate with the Petroleum Directorate and are excited for what lies ahead for both nations. With this agreement, we can enhance the very industries that will drive Africa into a new era of economic progress,” Paulino Jerónimo stated.

Sierra Leone, for its part, is seeking to advance in its nascent oil and gas sector, having launched a licensing round last May, offering over 63,000 square kilometers of highly prospective acreage.

The West African country is home to a working petroleum system that was supported by small-scale oil and gas discoveries, before exploration was put on pause around 2015/2016.

“This partnership with Angola is of uttermost importance as it creates and broadens opportunities for Sierra Leone to significantly expand its burgeoning oil and gas industry on the back of cooperation and regional trade. With recent discoveries in the country laying the foundation for robust sectoral growth, Sierra Leone is optimistic that it can create a competitive energy market, and this agreement serves to only enhance this agenda,” Foday Mansaray said.

One of the key components of the AOG 2022 agenda – which continues through Thursday as Angola’s premier energy event and investment platform – is exploring and advancing opportunities for regional synergies, as the country confronts a national mandate to diversify its economy, process more of its raw materials in-country and increase trade with its neighbors.