A former Director-General of the Ghana Atomic Energy Commission (GAEC), Prof Benjamin Jabez Botwe Nyarko is urging Ghana to invest in nuclear energy for affordable and reliable electricity and should not be scared by the past nuclear accidents.

Observing that fatalities resulting from nuclear accidents across the world are insignificant as compared to disasters caused by other forms of electricity generation options, Professor Nyarko advised Ghana to take advantage of the enormous benefits nuclear energy comes with to invest in it.

“Accidents associated with nuclear energy must not scare Ghana from investing in it because no industry is immune from accidents, but all industry learns from them. The reality is that lessons have been learnt from the past accidents and safety of nuclear power plants have improved to mitigate accidents,” he said while delivering a welcome address at a three-day training workshop for regional managers of Ghana News Agency (GNA) and selected editors at Peduase, Aburi, in the Eastern Region.

The workshop is under the theme: ‘Nuclear safety and environmental concerns; strengthening public understanding’.

Since 1952, there have been three major nuclear power accidents namely Fukushima Daiichi, which occurred in Japan in March 2011, Chornobyl, Ukraine (formerly the Soviet Union) on April 26, 1986, and Three Mile Island, Middletown, Pennsylvania, USA, in March 1970.

It is clear that since 2011 after the Fukushima Daiichi nuclear incident, there has been no major nuclear power plant disaster.

Ghana is hopeful of establishing its first nuclear power plant by 2030.

Professor Nyarko, a Nuclear Physicist and chairman of the NPG Board, explained that nuclear energy has a 60-year-record of low carbon with scientific proof.

Nuclear is a low carbon emission technology to deliver affordable power to industry, thus leading to industrialisation, and creation of hundreds of direct and indirect jobs for the citizenry.

Professor Nyarko, consequently, noted that the training workshop should equip the participants with in-depth insight into the sector to woo the public to give their support for the nuclear power project.

“You, the media, are needed in this journey to understand the project and, in turn, explain the issues to the public to allay their fears and perceptions,” he noted.

Professor B.J.B Nyarko further allayed the fears and perceptions in the minds of the public who have always connected nuclear energy to war because it was born out of war, explained that the country is reinforcing international requirements and regulations, and with advance technology, said Ghana is making no room for complacency in its drive to go nuclear, the solution to climate change and industrial growth.

“Ghana is ready to build a nuclear power plant with high regulatory and international standards at the core. And the media must help in disseminating this industrialisation drive to the public to give it their support,” he said in conclusion. 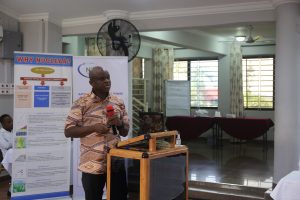