A former Managing Director of Tema Oil Refinery (TOR), Asante Berko, is back in the country’s premier refinery as a Financial Arranger and leading a Kenya-based Decimal Capital Ltd to enter into a lease agreement with TOR for the supply of crude.

This portal can confirm that Mr Asante Berko had been holding meetings at the refinery with the new management of TOR.

Asante Berko was appointed Managing Director of TOR in January 2020 after the resignation of Mr Isaac Osei.

He, however, resigned on April 15, 2020, following allegations of his involvement in a bribery scandal by the US Securities and Exchange Commission.

Mr Asante Berko is said to have allegedly paid bribes to some government officials and MPs to help the Turkish company, AKSA, secure a power deal in the country.

On Wednesday, energynewsafrica.com published a story that said the IMC constituted by Dr. Matthew Opoku Prempeh, Minister for Energy, engaged Intercontinental Energy Consortium who agreed to partner with TOR by investing US$60 million into the operations of the refinery through a tolling arrangement and recover their investment over five years.

Sadly, after their exit, energynewsafrica.com’s sources indicated that Mr Gabby Asare Otchere Darko, a relative of President Akufo-Addo, initially engineered the appointment of Mr Asante Berko as the TOR MD and was working hard to get him back to TOR as a Financial Arranger for TOR.

A statement issued by Tema Oil Refinery (TOR) on Thursday stated that Decimal Capital Ltd has been selected as the new strategic partner for TOR, confirming energynewsafrica.com’s publication.

Even though TOR’s statement did not give details of the partnership, energynewsafrica.com’s sources indicate that Decimal Capital Ltd is going to be part of the new Management.

According to the statement, the deal “is expected to boost the local supply of refined oil products and help stabilize the Ghana Cedi, in the lace of the ongoing international oil market crisis.”

“A local Transactional Advisor has been contracted by TOR to lead the negotiations in formulating the lease agreement, which is expected to be completed over the next three to four weeks.”

“The investment partner is expected to provide funding for a first phase, which will bring the Crude Distillation Unit (CDU) of TOR back on stream to refine about 45,000 barrels per day in the next few months,” parts of the release stated.

TOR noted that the agreement will “contribute significantly to improving fuel security” in the country.

“Production from TOR can contribute about a third of the current monthly consumption of diesel, and the full requirement of the Aviation Turbine Kerosene (ATK) and Fuel Oil needs of the country.” 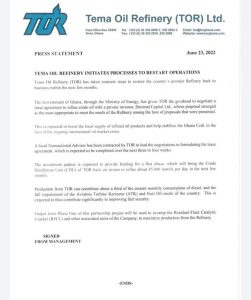