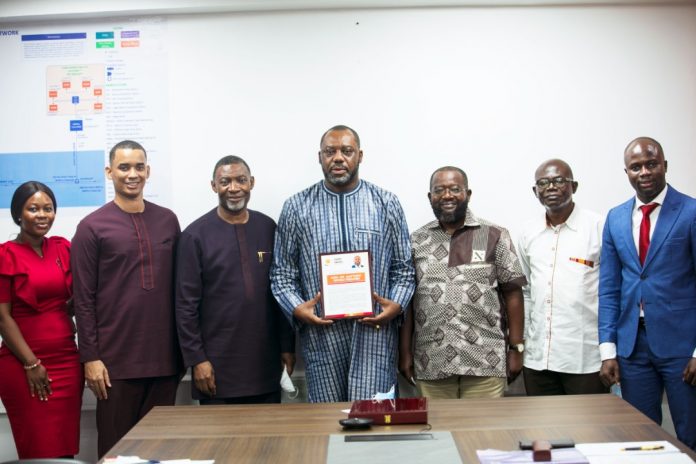 Ghana’s Minister of Energy, Dr Matthew Opoku Prempeh, has commended the Ghana Energy Awards (GEA) as a great initiative for the energy sector, particularly given the stringent processes attached to its organisation and the integrity of the people featured on its panel.

“I think that you’re onto something great. I’m impressed by the credibility of the people associated with the awards through the Awarding Panel,” he said and added that in recognition of the nature of the awards scheme, he would, henceforth, personally encourage and facilitate the participation of all agencies under his Ministry in subsequent events.

Dr Matthew Opoku Prempeh made these comments when a delegation from the Ghana Energy Awards called on him at the Ministry.

The visit was to brief the Minister on the upcoming ‘5th Ghana Energy Awards’, which is scheduled for 19th November 2021 at the Labadi Beach Hotel, in the capital of Ghana.

The delegation was led by Lawyer Kwame Jantuah, an Energy Consultant, who is the Chairman of the GEA Awarding Panel.


He was accompanied by Professor Felix Asante, Pro-Vice-Chancellor of the University of Ghana, in charge of Research, Innovation and Development; Dr Lawrence Tetteh, Economist, renowned Evangelist, who are Panel members; Ing. Henry Tenor, Chief Executive of the Energy Media Group, the Event Director; Nicholas Frimpong-Manso, MD of GP Business Consulting, Co-organiser of the event; with Patricia Danful and Cornelius Atiase from the Awards Secretariat.

The Ghana Energy Awards aims at recognising players in the energy sector through awards and acknowledging their accomplishments in the public and private sectors, as well as the non-governmental space.

According to the Awards Secretariat, the Ghana Energy Awards, since its institution in 2017, has built a name and brand within the sector that ensures continued interest from the sector itself.

The 5th Anniversary Ghana Energy Awards is under the theme: ‘Digitalised Energy Sector: The Key For A Resilient Economic Future’.

According to the Chairman of the Awarding Panel, Lawyer Kwame Jantuah, an influencing factor on the choice of theme was the realisation of the government’s intent to digitalise a lot of institutions.

“We felt that the energy sector companies and institutions have made a lot of progress in digitalising their operations. So, we felt it was the right time to award those taking digitisation seriously and encourage others in the sector to follow suit,” Lawyer Jantuah said.

He further noted that at the close of the nominations’ window, the Awarding Panel undertakes a thorough and independent scoring process, with final output by the validators, Mazars Ghana.

“We go through this rigorous process to keep the scheme security proof and ensure a fair competitive environment,” he said.

The organiser of the Awards, Ing. Henry Teinor disclosed that before the main awards ceremony, the Secretariat embarks on varied pre-event activities including the Media Launch, Energy Personalities Outreach Programme, Courtesy Calls on the industry, Site Visitation to nominees’ projects sites and participation in the Renewable Energy Fair Exhibition.

He said nominations for the 5th Anniversary Ghana Energy Awards is officially opened until 20th October 2021. Applicants can visit www.ghanaenergyawards.com to file nominations or call 055 930 0631 for sponsorship or other enquiries.

The Ghana Energy Awards is organised by the Energy Media Group, in partnership with GP Business Consulting and endorsed by the Ministry of Energy and the World Energy Council Ghana, with validation by Mazars Ghana.