The newly appointed Chief Executive Officer of the Bui Power Authority (BPA), the second-largest state power generation company in the Republic of Ghana, Samuel Kofi Dzamesi has expressed the belief that the clean energy projects being executed by the Authority will help to curtail the effects of greenhouse gas and climate change on the country.

“We are of the strong view that our generation from clean sources will go a long way to fight Climate Change.

“We all know that the use of fossil fuels generates greenhouse gas emissions that act like a blanket wrapped around the earth, trapping the sun’s heat and rising temperatures,” he said.

According to the World Health Organization’s Urban Health Initiative, “Emissions from transport represent a major problem for cities around the world, particularly in developing countries that are witnessing rapid urbanisation.”

The report also identifies the increased use of vehicles as the fastest-growing contributor to climate emissions and energy use with a global transport sector accounting for 14 per cent of the greenhouse gas budget.

Ghana aims to reduce greenhouse gas emissions by 15 per cent by 2030.

Consequently, the country is taking actions such as improvement in the energy efficiency of industrial facilities, replacement of light crude oil with natural gas in electricity generation plants and the reforestation and afforestation of 10,000 hectares of degraded lands annually.

Speaking at the maiden ‘E-Mobility Conference And Exhibition’ in Accra, on Thursday, September 23, 2021, Mr Kofi Dzamesi, in a speech read for him, said BPA is currently constructing a 250 Megawatt peak solar plant in the Bui Power enclave to hybridize the 404 Megawatt hydropower plant.

For the first phase of the project, a 50 Megawatt peak solar park (the largest so far in Ghana) had been completed earlier this year and connected to the national grid.

Additionally, one Megawatt Floating solar park, the first of its kind in the West African sub-region, had also been installed on the Bui reservoir and yet to be expanded to five Megawatts peak.

Also, the first-ever mini-hydro power plant has been constructed on the Tsatsadu Waterfall at Alavanyo-Abehenease in the Volta Region.

Mr Dzamesi said the deployment of these renewable energies to meet the growing energy demand for future generations is an excellent approach to help mitigate climate change.

“Our flagship initiative is the hybridization of the employing of a hydro-solar electricity generation at the Bui Generating Station which will ensure a 24-hour generation cycle. The generated electricity is evacuated into the National Interconnected Transmission System ensuring that all Ghanaians are benefitting nationwide,” he explained.

“Even though some modest effort to deploy renewable energy technologies have been made, we believe the bulk of the ideas to increase the share of renewable energy in the country are hidden in our youth,” he said.


In line with that, Bui Power Authority, a firm believer in the future leaders, partnered with the Energy Commission in this year’s Senior High School (SHS) Renewable Energy Challenge which aimed at helping uncover the renewable energy talent hidden in some of the senior high students.

A significant stride has also been made by contributing to another clean source of power generation, which is Ghana’s nuclear power programme, by assisting to form and house the Nuclear Power Ghana (NPG), which is a project organisation set up to manage Ghana’s first Nuclear Power Project, Mr Dzamesi disclosed.

He indicated that all these strides have been made by the Bui Power Authority by the President’s vision to ensure that the implementation of the ‘Drive Electric Initiative’ is smooth.

He explained that the Bui Power Authority is not only generating for domestic use but also available to generate electricity directly to organisations that may find themselves in the e-energy space to charge their electric vehicles. 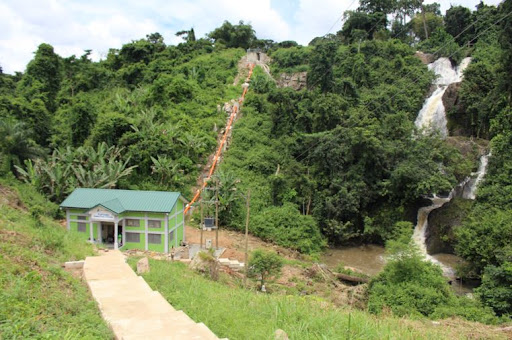 Mr Dzamesi, therefore, invited the private sector to commit to energy, adding that the Bui Power Authority is ready for such partnerships in the next phase of the Climate Change fight.

He expressed confidence that the Energy Commission’s collaboration with the Ministry of Energy in promoting electric vehicles and also drive the productive utilisation of excess electricity in the grid system is a step in the right direction.