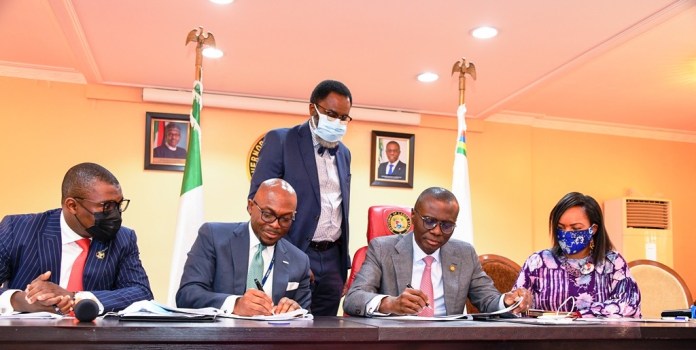 The Lagos State Ministry of Energy and Mineral Resources and the Ikeja Electric Plc has signed a Memorandum of Agreement to boost power supply in the state.

Under the agreement, signed at the Ministry on Tuesday, the Lagos State government would be financing the project, procuring and providing meters that comply with Ikeja Electric’s minimum standard meter specifications for installation to all customers on the designated feeders and distribution transformers in the Alimosho Local Government Area.

The state government would also be supplying personnel for the implementation of the project.

However, Ikeja Electric would be responsible for the execution of the project and ensure that funds received from the state government are applied towards network upgrades on designated feeders and distribution transformers and the installation of customer meters.

Speaking during the signing of the agreement at the Lagos State Secretariat, Alausa, the Commissioner for Energy and Mineral Resources, Mr Olalere Odusote said the agreement aims to increase power supply to, at least, 22 hours daily, from about eight to 12 hours daily.

Nigeria: Privatization Of Power Sector Not A Failure—IBEDC COO

The Commissioner said the implementation would start immediately, adding that Lagos State Government has identified several feeders that can provide power in 20,000 low-income areas with plans to replicate the initiative across the state.

He said: “This Memoranda of Agreement is to ensure the provision of uninterrupted power to residents, especially the low-income areas. It is also part of efforts to solve the problem of metering and infrastructure deficit to ensure these areas get power supply which is also measurable.

“The 20,000 meters have been procured by the state government and would be distributed free to low-income areas in Alimosho Local Government Area at the pilot phase. We intend to replicate this gesture in other areas of the state once the pilot phase is successfully executed.

“We have identified several feeders that can provide power in these communities and implementation would start immediately.”

The Managing Director of Sahara Power Group, Anthony Youdeowei said his company would be transparent in its dealings with the Lagos State Government and Ikeja Electric to provide power supply for Lagosians.