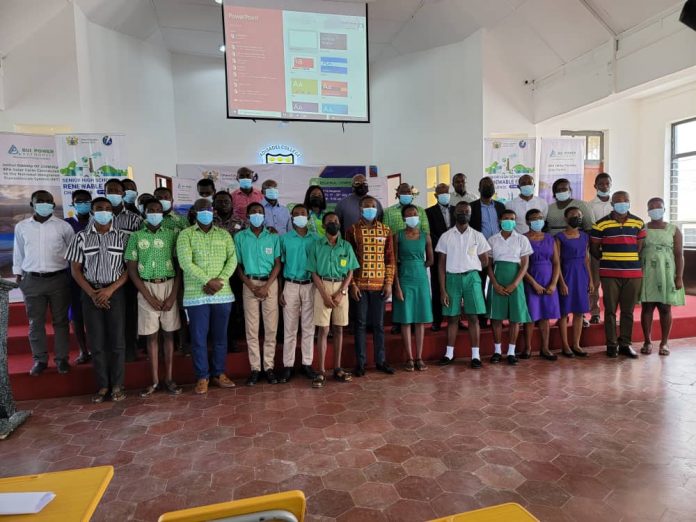 Bui Power Authority, the second largest state power generation company in the Republic of Ghana, is partnering with Energy Commission, the country’s electricity regulator, for the 2021 edition of the High School Renewable Energy Challenge competition.

The High School Renewable Energy Challenge was introduced by the Energy Commission in 2019 as a result of the global push for transition from the use of fossil based energy generation to renewable energy sources due to the impact of climate change.

The aim of the SHS Renewable Energy Challenge is to encourage young students to generate innovative ideas and turn the ideas into renewable energy prototypes.

The SHS Renewable Energy Challenge takes place in all regions of Ghana and the winning school from the regional level competes at the zonal level.

From the zonal level, the winning schools move to the grand finale which takes place at the Accra International Conference Centre.

According Myjoyonline.com, Mfantseman Girls’ School in the Central Region, on Wednesday, emerged winner for the second edition of the Senior High Schools’ Renewable Energy Challenge in the region after beating Adisadel College, St. Augustine’s College, Mankessim Secondary Technical School and Academy of Christ.

The girls reportedly presented a project on road power where speed humps could be erected on the country’s busy highways that could convert the motions or movement of the vehicles into energy to power street lights and other small power-consuming projects.

“We can promise you that, this year’s challenge will be very exciting with fantastic packages for the top three winners of the competition,” he announced.

He used the occasion to inform the gathering about some of the energy projects they have executed.

He said the Authority is constructing 250MW peak solar plant, explaining that the project is being executed in phases with the first 50MW peak completed and connected to the national grid.

He added that BPA has also installed a one Megawatt floating solar on the Bui reservoir, which is the first of its kind in the West African sub-region.

Additionally, he indicated they are expanding this to a 5MW peak.

He explained, “We also constructed the first-ever mini hydropower plant at Tsatsadu in the Volta Region, which was commissioned last year by President Akufo-Addo.”

Dr Tettey went on to explain that the negative effect of greenhouse emissions is mainly due to the production of carbon dioxide from the burning of fossil fuel (for electricity and transportation) far beyond the rate at which the green vegetation can absorb and convert to oxygen through photosynthesis.

“The result is what we are experiencing today: global warming, rising sea levels, floods, change in rainfall patterns among others, which we call climate change,” he explained.

According to him, the deployment of renewable energy to meet the growing energy demand of future generations was crucial and an excellent approach to help mitigate climate change.

He further stressed that even though some modest efforts to deploy renewable energy technologies have been made, they (BPA) believe the bulk of the ideas to increase the share of renewable energy in the country was hidden in the students’ participation in the renewable energy contest.

The Director, Renewable Energy, Energy Efficiency and Climate Change at the Energy Commission, Kofi Agyarko, on his part, said his outfit remained committed to scientific innovations through science, technology, engineering and mathematics (STEM).

He said efficient energy was the key to achieving the national industrialisation drive, bridge the academia-industry gap with new crop of engineers, researchers and scientists who will usher Ghana into low carbon emissions.

He said the Energy Commission was borne of the Commission’s quest to lead and drum the essence of renewable energy benefits.