The Government of Ghana has retreated by reducing the margin of taxes imposed on petrol and diesel which pushed the price of fuel higher above GHS6 in the West African nation.

The National Petroleum Authority (NPA), in a directive issued to the Association of Oil Marketing Companies, last week, to revise the prices of fuel following the passing of Energy Sector Levies Act that saw the introduction of Sanitation and Pollution tax of 10 pesewas on both diesel and petrol and 20 pesewas Energy Sector Recovery Levy, revealed that the BOST Margin had been revised from 6 pesewas per litre of diesel and petrol to 12 pesewas.

UPPF also saw an increment from 27 pesewas to 30 pesewas, while Fuel Marking Margin levy increased from 3 pesewas to 8 pesewas with Primary Distribution Margin going up from 8 pesewas to 11 pesewas. 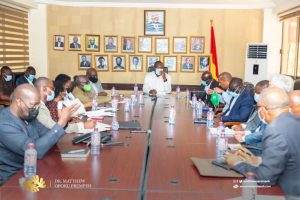 This development was met with stiff opposition from section of Ghanaians and industry watchers because of the coronavirus pandemic which has resulted in loss of jobs and dislodged incomes of many Ghanaians.

Immediately, the country’s Minister for Energy, Dr. Matthew Opoku Prempeh, on Tuesday, invited officials of NPA, BOST, leadership of Association of Oil Marketing Companies and some civil society organisations in the energy sector to a meeting.

Per the decision by the government, a litre of both diesel and petrol is expected to be reduced from GHS 6.13 to GHS6.05 by tomorrow.