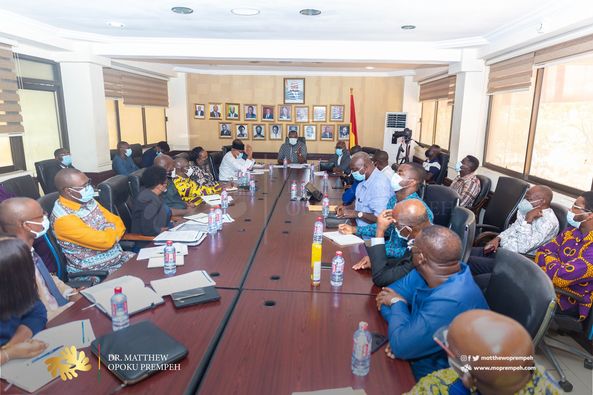 Ghana’s Minister for Energy, Dr. Matthew Opoku Prempeh, has assured the leadership of LPG Marketers’ Association of his resolve to address their grievances.

The LPG Marketers’ Association has been lamenting over the 18 pesewas addition on LPG, arguing that the increment would overburden consumers and consequently lead to decline in consumption.

According to data available to energynewsafrica.com, LPG consumption has witnessed a consistent decline over the last four months.

The sector Minister, on Wednesday, invited the leadership of the LPG association to a meeting to listen to their concerns.

The meeting was also attended by the leadership of the Association of Oil Marketing Companies and some officials of the National Petroleum Authority (NPA).

In his Facebook post sighted by energynewsafrica.com, the Minister said the purpose of the meeting was to discuss pertinent matters relating to the pricing regime of LPG and the gas cylinder recirculation project.

He said there was frank and open discussions in a bid to find common ground on these important subjects.

According the Minister, “We concluded the meeting with a clear roadmap on addressing outstanding issues.”

“The Ministry remains committed to ensuring that LPG is affordable as a viable source of energy for both domestic and industrial use and will continue to pursue the national conversation in that direction,” he concluded.

A source at the LPG Marketers Association told energynewsafrica.com that the Minister requested that they document all their concerns on paper and forwarded it to his office within a week for further discussions and way forward.