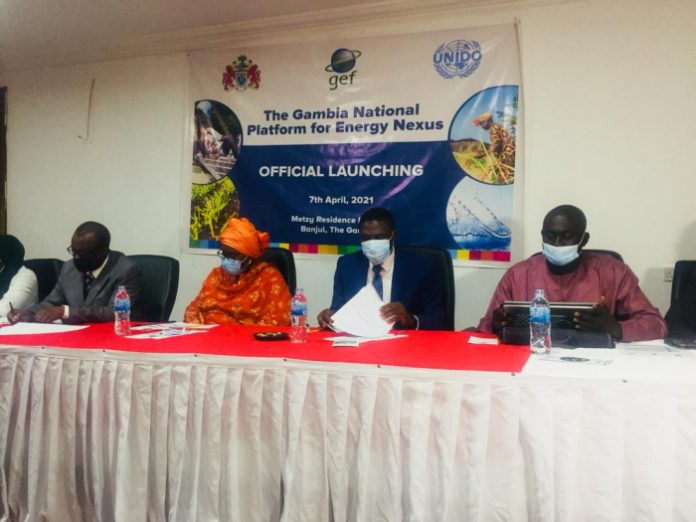 Gambia’s Ministry of Petroleum and Energy in collaboration with the United Nations Industrial Development Organisation (UNIDO), has launched the National Energy Nexus Platform as part of efforts to promote and adopt sustainable energy solutions in the West African nation.

Speaking on behalf of the Minister of Petroleum and Energy, Momodou B. Sarr, who is the adviser to the minister, said the platform was a multi sectoral group tasked with the responsibility of conducting policy dialogues linking energy with other relevant sectors of Gambia’s economy.

He added that for any country to achieve meaningful development; it must be able to provide adequate, reliable and affordable energy service to its people.

According to him, the government of The Gambia has accorded high priority to the energy sector.

He further added that the government of The Gambia strives to provide Sustainable Energy for All (SE4ALL) by 2030, cognizant of the importance of energy projects for other key sectors of the economy.

“The Gambia National Platform for Energy Nexus is now being established to focus on those interlinkages in order to strengthen the collaboration relating to energy issues among key sectors,” he noted.

For her part, the UNIDO representative,Haddijatou Jallow, said the launching represents a milestone for the government of The Gambia, adding that in the past decades, efforts were made in terms of policies such as on energy, trade and consumer protection in The Gambia.

According to her, in order to support the Energy Nexus issues, the National Platform will facilitate the implementation of incentives to promote the uptake and dissemination of the targeted EE solutions on large scale in different sectors, geographical areas and target groups.

She further emphasised that after the establishment of the platform, it is expected that at least 20 projects will use the Nexus approach to encompass RE/EE in other sectors.

Also, efforts will be made to use gender mainstreaming during the implementation as 40% of the platform representatives will be women.

“In line with our mandate to promote Inclusive and Sustainable Industrial Development, we support together with our partners the inevitable energy transition and the associated industrial transformation through promoting policy coherence, technology innovation and integrated energy system,” she concluded.