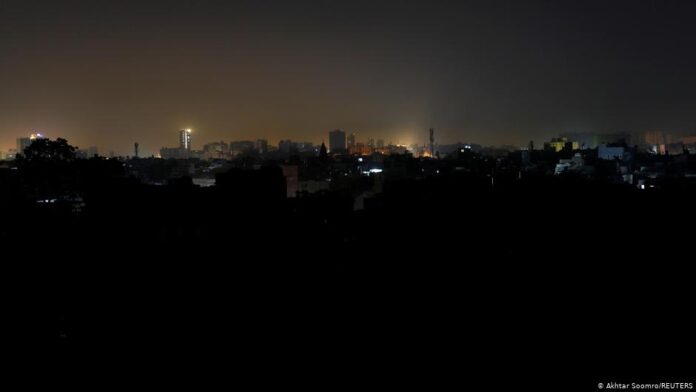 Electricity supply in Pakistan is gradually being restored Sunday after the country’s national power grid experienced a major breakdown, leaving millions of people in darkness.

All major cities, including the capital Islamabad, were hit.

“The system is stable now and electricity supply has been restored in major cities of the country,” Energy Minister Omar Ayub reportedly told journalists on Sunday.

According to Ayub, it would take a few more hours to resume power supply across the whole country.

What caused the outage?

The country’s Energy Ministry is reported to have said that the outage was caused by a fault in the power transmission system.

Ayub said a technical fault in the Guddu power plant, a thermal power station in the southern province of Sindh, had triggered the system shutdown around 20 minutes before midnight.

“[The] electricity blackout in the country was due to sudden drop in the frequency of power transmission system from 50 to 0 in less than a second,” it said.

Follow-up tweets said the ministry was working to solve the problem “quickly” and gave updates as different facilities were fired up again.

“Systematic restoration of power will be initiated soon,” they explained. “Once the initial frequency is met, the restoration work speeds up.”

How did people experience the blackout?

Residents from cities across the country, including Karachi and Lahore, reported massive power outages on social media.

One social media user tweeted a picture of the blackout from the city of Karachi.

The blackout is one of the worst that the country has experienced. In 2015, around 80% of the country was left without power after a key transmission line broke down.