Ghana’s Energy Minister, John Peter Amewu, who contested the Hohoe Parliamentary seat on the ticket of the governing New Patriotic Party in the December 7, 2020, general election, has secured a landslide victory to the country’s house of legislature.

He is the first person to have won election in the Hohoe Constituency in the Volta Region, after failing on three different attempts. 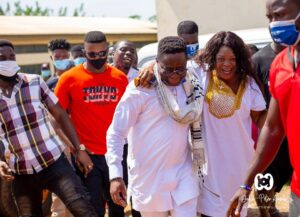 This performance is a huge jump from the results his party had recorded since 1992 in parliamentary polls.

For instance, in 2016, the NDC candidate, Bernice Adiku Heloo, secured 35,437 as against the NPP’s Marlon Praises Anipa, who polled 6,462; which has been the usual polls outcome in most parts of the Volta Region.

With the voter roll in Hohoe having 59,228 with 124 polling stations, many doubted that Mr Amewu could win the elections. For many, he would, at best, close the gap.

Nonetheless, the win came with over 5,000 votes difference; a proof of the broken grip of the NDC in Hohoe, when compared to 2016 and other election results since 1992.

Declaring the polls, the Returning Officer for the parliamentary election in Hohoe, Wisdom Kofi Akpakli said although the opposition NDC had some concerns with the results, they had been clarified and all parties were satisfied with the results.

Mr Awemu took to Facebook to express his appreciation and gratitude to the President of the Republic, Nana Addo Dankwa Akufo-Addo, for his unconditional support to him and the people of Hohoe.

“Special thanks also go to the chiefs and queen mothers, religious leaders, national, regional and constituency NPP executives, my colleague Ministers, party members, campaign volunteer groups and supporters. God bless you all for your hard work,” he said.

He also thanked the NDC for a good contest and assured that his leadership would not discriminate but cover every resident within the constituency.

“I promise to contribute to the creation of a united and prosperous Hohoe,” he concluded.