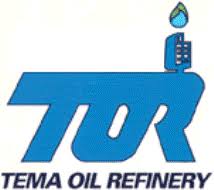 The Tema District Council of Labour (TDCL) of the Trades Union Congress (TUC) in the Republic of Ghana has petitioned President Nana Akufo-Addo, on behalf of the staff of Tema Oil Refinery, to intervene to address some pressing issues which are affecting the profitability of the state refinery.

According to a statement issued and signed by Dotse Kojo Gadabor, Chairman of TDCL, the council held a meeting on Wednesday and took notice of some disturbing development at the Tema Oil Refinery and petitioned the President accordingly.

Workers of the Tema Oil Refinery had been up in arms with the leadership of the West African nation’s only refinery over poor management of the refinery.

They called out loud by describing the Board members of the refinery as incompetent and demanded their immediate dissolution.

They stated that the incompetent leadership being exhibited by the Board has worsened the plight of the workers as their pension trust fund had been in arrears.

The description of the Board as incompetent did not sit well with the management who responded, insisting that the board had demonstrated competence by ensuring that some legacy debts were cleared as well as.

However, a statement issued by TDCL and copied to energynewsafrica.com said: “We, as a Council, would like to call on the office of the President and all stakeholders who have a role to play in addressing the challenges to, as a matter of urgency, give it a needed attention so we can arrive at a lasting solution.

“We also wish to state that failure or undue delay in resolving this matter, the leadership of the council will be compelled to do the needful in calling for all workers in the region to solidarise with our members at TOR,” the statement said.

“We are well aware of one of the core objectives of the Trades Union Congress and responsibility on our leadership that Touch One; Touch All,” the statement concluded. 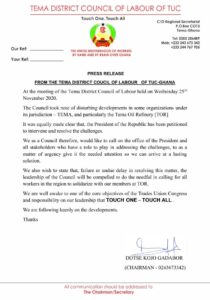