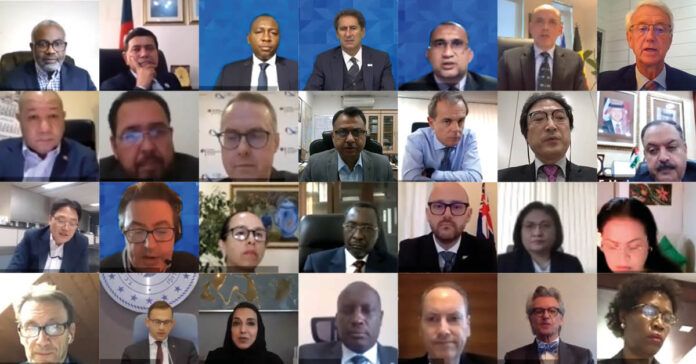 “The challenges posed by the COVID-19 pandemic are vast, evolving, and have changed all that we were accustomed to, at all levels, across the world,” said H.E. Dr. Bachir Ismael Ouedraogo Burkina Faso Energy Minister and Chair of the 19th and 20th IRENA Council, addressing more than 361 participants from 103 countries and the European Union.

“I wish to express my solidarity with all Members and the billions of people around the world that are impacted by this global pandemic.”

During the virtual meetings on 3 and 4 November 2020, delegates expressed their appreciation of IRENA and its Members for adapting to COVID-19 and ensuring that the Agency and its governing body meetings continued their work effectively during these unprecedented times.

In his opening remarks, IRENA Director-General Francesco La Camera said: “As the pandemic continues to rage with massive consequences on the lives and livelihoods of millions of people around the world– we can say with certainty that the imperative of the energy transitions has become even more apparent.

“IRENA, with its global membership and direct access to the wealth of knowledge, experience, and expertise of its Members is uniquely placed to lead this effort,” he added.

Mr. La Camera presented the Annual Report on the Implementation of the Work Programme and Budget to the Council, including data from the most recent SDG7 Tracking Report, published in May 2020, which IRENA chaired in collaboration with the IEA, World Bank, and UN Statistics. The report showed that while energy access is improving, more than 800 million people worldwide still lack access to electricity, which the Director-General underscored as a clear call to action.

The Director-General also presented findings from IRENA’s ‘Post-COVID recovery: An agenda for resilience, development, and equality’ to the membership. The report, launched in June, provides a way to link the short-term response to the pandemic to the Paris agreement’s medium- and long-term goals. The report also points out the need to invest 2 trillion USD in the energy transition within the next three years to make a green recovery possible.

Following the Director-General’s remarks, IRENA’s Directors presented their work to the Council, highlighting the Agency’s work on innovation, policy, finance and project facilitation, socio-economic analysis, and country-level support. Members welcomed IRENA’s efforts, including the effective implementation of the work programme and its continued engagement with members during the global pandemic. H.E. Ms. Perina Sila, Ambassador of Samoa to Japan and Permanent Representative to IRENA chaired the IRENA Council’s Programme and Strategy Committee and commended the Agency’s leadership in guiding the energy transition through the pandemic by aligning recovery efforts with long term sustainable development goals and the goals of the Paris Agreement.

Delegates also highlighted the importance of the Agency’s Collaborative Frameworks and stated that they have “resulted in an effective multilateralism approach that delivers results” and considered it as another opportunity for the Agency to be more responsive to the priorities of the membership.

The Collaborative Frameworks bring countries together to identify priority areas, concrete actions and foster international collaboration on key issues such as the development of hydropower, strategies to support high shares of renewables, the future of the renewable hydrogen economy, ocean and offshore renewables and the geopolitics of the energy transformation.

Further topics discussed include IRENA’s role in the Climate Investment Platform and the Agency’s administrative and institutional matters.

Arrangements for IRENA’s 11th Assembly were also a matter of discussion, including an endorsement of the Council Chair’s proposal to establish an open-ended ‘High-Level Forum on Energy Transition’ at the Assembly.

India: Gov’t Not In A Hurry To Seek U.S Nod For Oil Supplies From Iran, Venezuela