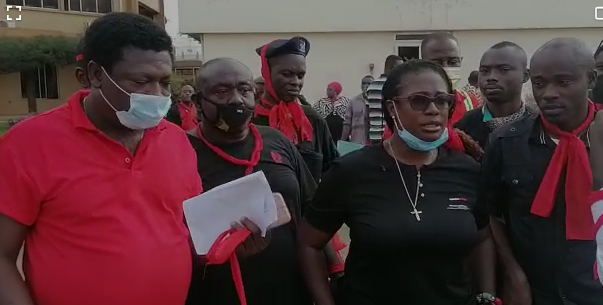 Angry workers of Ghana’s only refinery, Tema Oil Refinery (TOR) have called on the President of the West African nation, Nana Akufo-Addo to dissolve the Board with immediate effect citing incompetence.

During a protest at the refinery on Wednesday, the workers accused the Tongraan Kugbilsong Nanlebegtang led Board for disappointing the President, the nation as well as the workers. 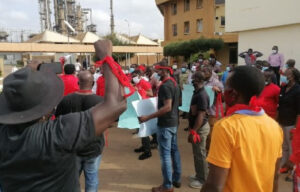 According to the workers, the board and management have shown very little commitment and sense of urgency in improving the fortunes of the refinery.

Chairman of UNICOF, Bright Adongo said “the workers went out of their job description and made proposals to the board which interestingly will not cost them a dime to implement yet they failed to exercise their oversight responsibility and get work done”.

Bright Adongo who represents workers of UNICOF in the refinery further expressed disappointment in the failure of the board to assure workers of the future prospects of revenue inflows.

He further alleged that the refinery is still indebted to the Ghana Revenue Authority (GRA), the Social Security and National Insurance Trust (SSNIT), the Electricity Company of Ghana (ECG) and the Ghana Water Company Limited.

“What we want to say is that with immediate effect the president must dissolve the board because it is in a state of disarray and we are not happy,” he said.

The chairperson of the Ghana Transport, Petroleum and Chemical Workers Union, Serwa Duncan – Williams also claimed that, the board failed to secure partnerships from several investors who had expressed interest in expanding the refinery’s capacity between 100,000 to 150,000 BPSD