The Kpone Generating Station was first commissioned in 1982 with an installed capacity of 160MW.

The station operated reliably until the early part of 2000, when the power generating components started experiencing higher than normal failures and forced outages.

In addition, spare parts for repair works were very difficult to procure as most of the plant equipment became obsolete. 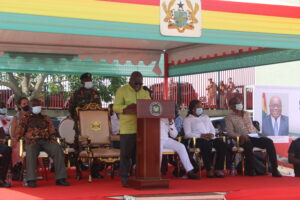 The Government of Ghana, therefore, secured a loan facility of €50 million from Agence Française de Développement (AFD) for VRA to finance the Kpong Generating Retrofit Project.

Speaking at the commissioning of the project on Monday, October 26, 2020, Ghana’s President, Nana Akufo-Addo said the project would guarantee the efficiency, sustainability and reliability of the country’s power generating plants.

The completion of the retrofit, according to President Akufo-Addo, “restores this power station into as new condition, and guarantees the country 30 more years of operation.”

The ceremony was witnessed by traditional rulers, District Chief Executives, officials from the Ministry of Energy, and CEO of some state power companies. 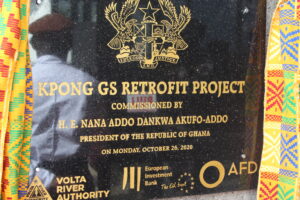 The President said: “The completion of this project is further proof, if any were needed, of the expertise of Ghanaian engineers and technicians in their ability to administer new technologies for the effective management of our power plants. It is particularly gratifying that, in spite of the disruptions posed by the COVID-19 pandemic, the contractor, VRA and the consultants were able to complete this project within a reasonable time frame.”

President Akufo-Addo added that the government would continue with its efforts to support the energy sector so it could address all the challenges it faces, particularly, the considerable financial burden on the sector posed by the excess power capacity, contracted by the Mahama-government, and reiterated the commitment of his government to making Ghana a net exporter of electricity in West Africa.

He, therefore, charged the VRA, which has been in the export trade for some fifty years, to ensure that it expands the frontiers of its current operations to countries like Mali, who requires additional electricity supply, to meet its development needs. 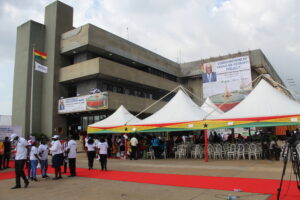 “Not only will this allow us to meet our objectives, but it will also underline the spirit of co-operation which is the foundation of ECOWAS, of which I am, currently, its Chairman,” the President added.

He stressed that the government would continue to support renewable energy development such as hydro, solar and wind, with the construction of the Pwalugu Multipurpose Dam and Lawra and Kaleo Solar Power Plants buttressing the point.

“I encourage the Volta River Authority to explore the development of a hydro site on the Oti River, and collaborate with the Ministry of Energy on the other hydro sites on the Pra, Ankobra and Tano Rivers, in order to reduce our national carbon footprint in the electricity sector,” he said.

President Akufo-Addo thanked the French Government and the European Union for the support offered for the realisation of this project.