Ghana’s Minister for Energy has denied reports that he is sharing fuel coupons for drivers in the Hohoe Constituency in the Volta Region.

Social media was awashed with photos of GHc100 worth of fuel coupons bearing the picture of the country’s Energy Minister.

Some were shocked as to why the Minister, who is contesting the parliamentary seat of Hohoe in the upcoming general elections, could be sharing free fuel coupons. 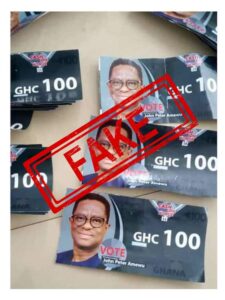 According to the statement, the alleged fuel coupon is fake and urged the general public to disregard it and treat it with all the contempt it deserves.