Petroleum Tanker Drivers in the Republic of Ghana have given a 48-hour ultimatum to President Nana Akufo-Addo to relieve the Chief Executive Officer of the National Petroleum Authority (NPA), Hassan Tampuli, of his post.

According to the National Union of the Tanker Drivers, the head of the downstream regulator has failed to address some grievances which continue to affect their operations.

Addressing a press conference in Tema on Monday, October 19, 2020, National Chairman of the Ghana National Petroleum Tanker Drivers’ Union, George T. Nyaunu chronicled a number of grievances which the NPA has failed to address.

He mentioned the harassment of drivers at check points by Western and Central Regional police officers, closing down of 86 gas filling outlets which have legal licences to operate, non-compliance of transit losses and refusal of the depot operators to abide by the 20 degree Celsius loading temperatures, non-compliance of 2017 Memorandum of Understanding signed by stakeholders on drivers and mates condition of service, as well as the NPA’s inability to ensure that drivers get their portion of the benefit of Covid-19 fund to essential or front line workers.

Mr. Nyaunu accused Mr. Tampuli of treating drivers unfairly by not making sure that drivers get a fair playing field as stakeholders in the downstream sector. 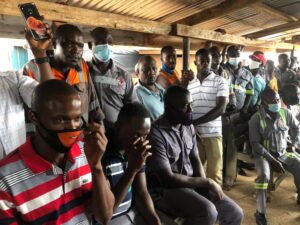 “Mr. Tampuli has not been helpful. Maybe, the position is bigger than him. Police officers have been beating and slapping drivers. We have complained to NPA. Meetings have been held on the issue yet the situation is the same,” he told energynewsafrica.com.

According to Mr Nyaunu, if President Akufo-Addo fails to act by sacking the NPA CEO or get their issues resolved, they would have no other option than embark on nationwide strike action.

“We are hoping for a favourable response from the President and NPA following which we will shall advise ourselves on our next line of action,” he stated.

Energynewsafrica.com could not reach the CEO of NPA on the telephone, however, Head of Corporate Communications of NPA, Anny Osabutey indicated that the Authority was preparing an official response to the claims made by the Petroleum Tanker Drivers’ Union.