A domestic gas explosion at Powerland, a suburb of Madina in the Greater Accra Region, Ghana, on Tuesday has reportedly rendered scores of people homeless.

The explosion is said to have started in a wooden structure at Powerland, near Crown Medical Centre, and spread to other structures.

It is unclear what caused the explosion but some eyewitnesses said the fire started when a woman, who was frying eggs, forgot to turn off her LPG cylinder after she had finished, thereby, causing the fire. 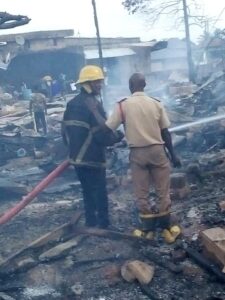 They continued that the woman, ignorant of how to douse the fire, dashed out wailing for help, a situation that escalated the inferno.

Speaking to energynewsafrica.com, Mr. Alexander Amankwah Agyei, who is an investigator with the Madina Fire Station, said the fire destroyed about sixty-five wooden structures.

He said the intervention of the fire personnel prevented it from spreading to other concrete houses in the vicinity.

He said the fire escalated because almost all the occupants of the affected structures used LPG cylinders.

According to him, they retrieved about 62 gas cylinders which were completely burnt.