The General Transport, Petroleum and Chemical Workers Union (GTPCWU), an umbrella body of oil and gas sector workers in the Republic of Ghana, has petitioned the country’s Ministry of Energy to intervene to address an unfair labour practice by the Management of Schlumberger against its members.

In a three-paged document intercepted by energynewsafrica.com, GTPWU revealed that management of Schlumberger, an international oil and gas service provider operating in Ghana in, May, this year, issued letters to majority of workers to go home for 12 months without pay.

“The local union entered into negotiations on the 13th and 14th of May, 2020, to determine a redundancy package to those workers to be affected by the exercise. Barely two hours after adjournment of the meeting on 14th May, 2020, management called a meeting of all employees and threatened that if they (Ghanaian emplyees) would not accept management’s offer of 2.5 month consolidated for every year of service, they would not to pay salaries henceforth.

“On 15th May, 2020, just after close of work, a number of employees were issued with letters of suspension from employment taking effect from Monday, 18th May, 2020, to last for a period of 12 months despite the ongoing negotiations at the level of Standing Negotiating Committee.”

The Union claimed in their petition that conditions attached to the suspension was that the affected workers would not be paid a dime for the twelve-month period and this, they maintained is unfair and, therefore, want the Minister’s intervention. 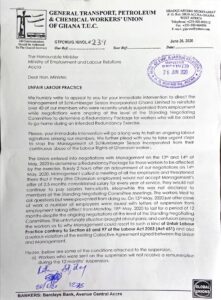