The incident, which attracted global attention, touched the hearts of many across the globe resulting in droves of people and organisations (both local and foreign) donating into a pool to enable the government support the victims.

Not happy about how the victims have been left helpless after the horrendous incident, One Ghana Movement, a pressure group, filed a suit at the country’s court against GOIL, National Petroleum Authority (NPA) and Accra Metropolitan Assembly for their negligence, which they (plaintiff) claimed contributed to the disaster.

In a statement signed by the Acting Executive Director of One Ghana Movement, Emly Kanyir Nyuur said, “The only funds received by victims to date was from a $200,000 donation by the President of Benin which the NADMO and AMA disbursed to the victims in June 2019.”

It lamented, “This begs the question where are the funds that were donated to the victims and why have they not been disbursed even five years after the disaster?”

It observed that since 2017, the One Ghana Movement has taken on a legal project, the ‘Justice for June 3’ victims or ‘J4J3’ campaign, seeking equitable compensation for the victims and to also hold officials liable for their actions and inactions that led to the avoidable fire disaster. 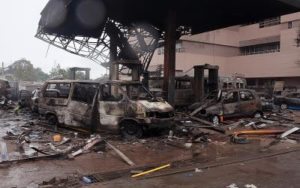 “While the organisation acknowledges that rhe wheels of justice grind slowly, we do believe that the victims have endured significant trauma over the past five years and need to be adequately compensated to enable them afford a quality life and restore faith in the justice system,” the movement said in a statement.

It spelt out its objectives on how to secure equittable compensation for the victims, and hold officials and institutions accountable for their actions and inactions.

The group said the victims and the movement have started a legal action against Ghana Oil (GOIL), the National Petroleum Aurhority (NPA) and the Accra Metropolitan Authority (AMA) for their complicity in the disaster and hope that the right punushments would be meted out to officials who were negligent.