The police in Dodowa in the Shai Osudoku District of the Greater Accra Region in the Republic of Ghana have charged a staff of Tema Oil Refinery (TOR), who shot and killed a suspected land guards’ gang leader, for murder.

The suspect, 37- year-old Thomas Oppong, a Mechanical Technician with TOR, has, thus, been remanded into police custody when he appeared before the Ashaiman District Court presided over by His Worship Charles Boateng.

That was when the suspected land guards, numbering about 20, allegedly stormed Thomas Oppong’s residence and attacked him and fired gun shots apparently to kill him but managed to escape.

He allegedly grabbed his licensed pump action gun and fired back, killing the leader in the process.

Sources within the suspect’s family told energynewsafrica.com that Thomas Oppong had been in dispute with the owner of DBS Roofing Sheet Company over the land on which the suspect’s house is situated.

The police, in a statement issued earlier and intercepted by this portal, said their preliminary investigation revealed that the Green House Ghana Ltd, where the deceased was an employee, had a land dispute with suspect Thomas Kwaku Oppong for some time now.

The statement continued that the deceased, on 13th May, 2020, went to the disputed land to inspect the company’s ongoing projects where he was alleged to have been shot by the suspect.

However, police in a statement of facts presented at the Ashaiman District Court did not touch on the fact that there was a dispute between the suspect and DBS Roofing Sheet Company over a plot of land but rather said the deceased, which the police claimed worked with Green House Estate Company, went to deliver a message from his boss to the suspect, and without provocation, the suspect went into his room, picked up his gun and shot and killed the deceased, Kwame Huzzey.

Energynewsafrica.com has posted the police statements for our readers to analyse.

Below is the first statement the police issued.

The Dodowa Divisional CID is investigating a case in which suspect Thomas Kwaku Oppong is alleged to have shot and killed Kwame Huzzey on 13th May, 2020 at Shai- Hills, opposite Green House Company Ltd.

The deceased was a security guard with Green House Company Ltd a company under One District One Factory at Shai- Hills, Afenya.

Preliminary investigation revealed that the Green House Company Ltd where the deceased
was working has a land dispute with suspect Thomas Kwaku Oppong for some time now. The deceased on 13th May, 2020 had gone to the disputed land to inspect the company’s ongoing projects where he is alleged to have been shot by the suspect.
The deceased was rushed to the Tema General Hospital where he was pronounced dead. The body has been deposited in the hospital ‘s morgue for autopsy.
Police retrieved 1 pump action gun, 6 live cartridges 2 spent cartridges and a short gun from the crime scene.

Below is the statement police presented at the Ashaiman District Court 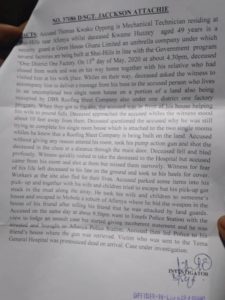 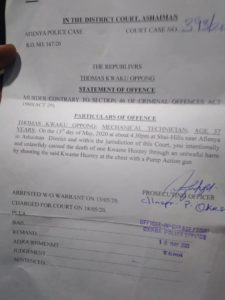