The Government of Ghana’s handling of the maiden licensing bid round for six oil blocks it offered to investors offshore has been described as satisfactory, a report by the Natural Resource Governance Institute (NRGI) has said.

The report assessed the government’s handling of the licensing bid round in four thematic areas namely: Procedural requirements on competitive bidding, Direct negotiations, Compliance with calendar of events under bidding round and Public engagements.

The procedural requirements on competitive bidding scored 77 percent compliance with calendar of events under bidding round was rated 80 percent.

On the other hand, direct negotiation and public engagements scored 55 percent and 50 percent respectively. 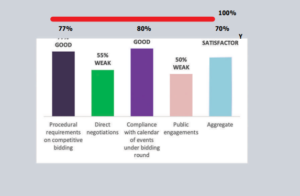 The entire process cumulatively scored 70 percent, which is interpreted as satisfactory on the adopted grading scheme.

Three of the blocks-2, 3 and 4-were to go through competitive bidding process while two blocks-5 and 6-were supposed to be for direct negotiations.

One of the blocks was reserved for Ghana National Petroleum Corporation (GNPC).

The report makes the following recommendations:

Government must start issuing reconnaissance licences to gather quality data to aid future bidding rounds. The cost for such an activity will be recovered from data fees during competitive tendering. Liberia used this approach to acquire data which enabled them to carry out competitive tendering; Government must publish disaggregated information on bidders and their respective blocks they are prequalified for; Disclosures on beneficial ownership must be made publicly available during the prequalification stage. This allows for citizens to monitor the bidding process and to identify politically exposed persons in the contract process.

Again, government must ensure that direct negotiations are done only where peculiarities that point to a specific company to optimise the resources are established; Government must make deliberate efforts to engage the public beyond the requirement of the law. It is recommended that such engagements must have feedback systems to encourage citizens to share information that might be relevant for the licensing round and by extension, the national interest.