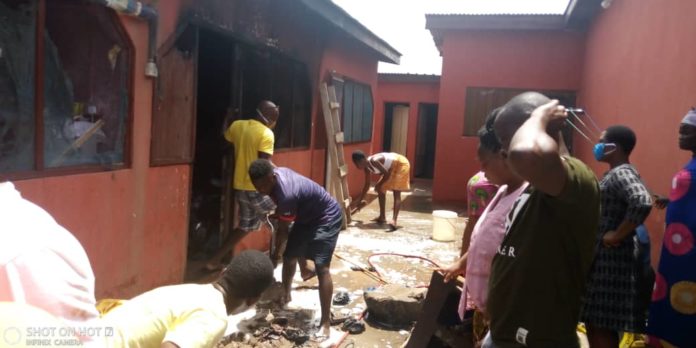 A gas explosion at Lebanon Zone Two, a suburb of Ashaiman in the Greater Accra Region of the Republic of Ghana, has left 51-year-old Michael Akpeleteh and his two children dead.

The three deceased persons got burnt when a gas cylinder exploded on Thursday.

Eyewitnesses’ accounts indicated that the wife of the deceased, Michael Akpeleteh, set fire on a gas stove to prepare rice porridge and left it in the care of the children for the market.

According to the eyewitnesses, few minutes after the woman had left, the gas cylinder exploded, when the husband and his four children were all in the room.

They continued that when the cylinder exploded, the father and his children could not see their way out, so they were trapped in the explosion, consequently, suffering massive burns and were dashed to the Tema General Hospital.

Energynewsafrica.com gathered that Michael Akpeleteh and his 12 -year-old daughter died on the way while the other child died on admission.

Meanwhile, two other children of the late Michael Akpeleteh who sustained serious injuries are on admission and responding to treatment at the Tema General Hospital.

Medical Director at the Tema General Hospital, Dr Richard Anthony told the press that Michael Akpeleteh and his 12-year-old daughter were brought in dead while the third died few minutes on admission at the hospital.

The remains of the deceased, according to Dr Richard Anthony, have been deposited at the hospital’s morgue.