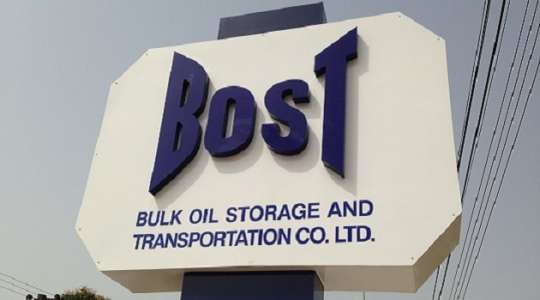 Contrary to the opposition party’s claim, the current BOST management says the company was in a rotten state and saddled with huge indebtedness when it took over in 2017.

However, BOST, in a statement copied to energynewsafrica.com highlighted the state of BOST as at January 2017.

“BOST, in January 2017 when the NDC handed over power, owed $624 million to suppliers, BDCs and related parties in respect of crude oil imports for processing at TOR and refined products which got lost from BOST tanks (documents available).

“As at 31st December, 2016, the volume of products held across BOST depots in the nation stood at 143,609,410 liters and this could meet one week and five days of national demand. As we speak, the total volume of products available in BOST tanks across the country given a weekly consumption of 80,000,000 liters on average is the equivalent of four weeks of national demand.

Products not accounted for by BOST from BDCs between 2010 and 2014 amounting to $35.913 million hanged on the neck of the company from eight (8) BDCs.

The 2016 audited accounts reflected a total loss of GHS458.639 million from BOST operations.

“As at January 2013, 15 out of 51 tanks owned by BOST across the country were non-operational, thus, decommissioned.”

The Tema-Akosombo-Product-Pipeline (TAPP) had been non-operational since 2013.

As at January 2017, the 77Km 12” pipes that BOST had previously acquired for construction of a pipeline between Accra Plains and Akosombo Depots were still stuck in Houston and incurring additional costs.

In January 2017, all four BOST river barges, tug boat and floating dock were broken down and non-operational, which limited transportation of petroleum products across the country to Bulk Road Vehicles.

This left BOST with no revenue from transmission since BRV transport is run through third-party transport companies.

The CBM which was built on a Build-Operate-Transfer basis was transferred to TOR and subsequently leased to a South African Company under the single management for BOST and TOR.

Touching on the decision by the previous administration to allow Mr Kwame Awuah Darko, who was the Managing Director of BOST to also manage TOR, the statement said the decision to place Tema Oil Refinery and BOST under one management did more harm than good over the period.

Much of the harm is attributable to the opacity which characterised the operations of the two companies and the over-politicisation of their operations, which resulted in the delivery of products to entities which have not as yet paid for the supplies.

BOST, after spending over US$8 million on the CBM, lost the right of ownership to TOR.

The asset was further leased to a South African company under suspicious circumstances between 2014 and 2016. BOST’s indebtedness to crude oil suppliers in excess of $500 million as at December 2016, TOR owed BOST 7,772 metric tons of refined products and 48,597 metric tons of crude oil.

Other concealed and obscure transactions occurred during the period: Supply of products to NNPC through Sahara Oil where the funds were retained by Sahara to settle outstanding TOR debts. TOR supplied Vihama products worth GHS26 million without disclosing the transaction to BOST. It took a forensic audit to disclose the transaction.

DRAFT RESPONSE TO THE NDC ON THE STATE OF BOST