In a letter written President of South Africa, Mr Mabuza, said his decision to resign was due to ESKOM’s failure to meet the commitment it made that there would be no loadshedding until 13 January 2020.

He apologised for to the president, his deputy and the Pubilc Enterprises Minister for failing.

“Eskom presented plans to ensure that the risk of loadshedding would be eliminated during the holiday period until 13 January 2020. Eskom also outlined the risks affecting the national grid,” Mr Mabuza said in his resignation letter.

President Ramaphosa has expressed his gratitude to Mr Mabuza for serving Eskom and the nation during a challenging period and has commended Mr Mabuza for taking responsibility and accepting accountability for events under his leadership.”

It went on to state that the government will soon announce a “reconfigured Eskom board with the appropriate mix of electricity industry, engineering, and corporate governance experience”. 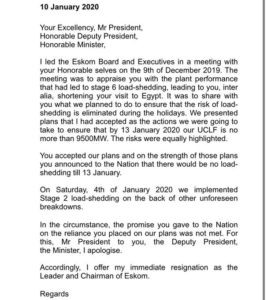 No loadshedding scheduled for Monday

The power utility announced this morning [Monday, 13 January] that the power system is “tight, but we are working hard to stabilise our generation fleet in order to ensure that we meet today’s demand”.

The utility anticipates some units coming back online during the course of the day and states that it has adequate reserves for emergency generators.

Unplanned outages or breakdowns were at 13,867MW as at 06h00 on Monday morning.

“Should we lose some generation units during the day, we will use emergency reserves and may implement load shedding in the evening. However, if we experience drastic changes in the system, load shedding may be implemented earlier in the day,” the company warned.

FPSO Shuts Down for Routine Maintenance

Eskom, government plans for Stage 5 and Stage 6 load shedding to stave off...