Four departments of the hospital are to save the health facility that colossal amount due to an intervention by the Millennium Development Authority (MiDA).

The Accident and Emergency, Child Health, Central Laboratory and Medical departments of the hospital have been consuming 2.8m kilowatts of electricity annually, which translates to GHc3.4 million.

This is as a result of high-powered electricity consuming electrical appliances fitted at the four departments of the hospital.

The premier hospital is among six public sector institutions that is benefiting from MiDA’s Energy Efficiency and Demand Side Management (EEDSM) project being funded by the Millennium Challenge Corporation (MCC) with an amount of US$3 million.

Under the scope of the EEDSM project, MiDA is undertaking a number of activities including replacing and retrofitting the four departments of Korle-Bu Teaching Hospital with energy commission’s certified energy efficiency fans, refrigerators, air conditioners and bulbs.

Per an Investment Grid Energy Audit (IGEA) done by DESL, a consultant contracted by MiDA, electricity consumption at the four departments of Korle-Bu Teaching Hospital is expected to be reduced by 40.2 percent. This will translate into GHc2.1 million savings annually. 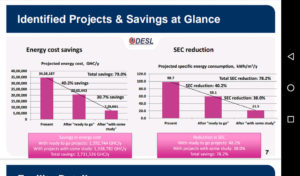 Speaking to journalists at the Korle-Bu Teaching Hospital, Priscilla Agyei Darko, Project Engineer for Energy Efficiency and Demands Side Management (EEDSM) at MIDA, explained that the initiative formed part of the many projects under the Ghana Power Compact Agreement.

“So, what that programme seeks to do is to change the behaviour of people concerning energy efficiency and how to save energy in our various institutions and homes based on behaviour and changing how we see things-what you buy, switching off the lights when you leave your room, checking the star ratings when you are going to buy an appliance. So, that is what EEDSM is mostly about… changing the behaviour and our attitude towards the usage of energy and the things we need to buy to save energy. 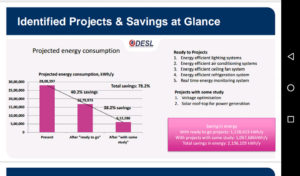 Explaining how the selection process for the project was done, Priscilla Agyei Darko said MiDA wrote to ECG for a data on high consumption institutions.

“ECG gave us a list of 20 institutions, but when MiDA wrote to them (institutions), only six of them responded,” she explained. 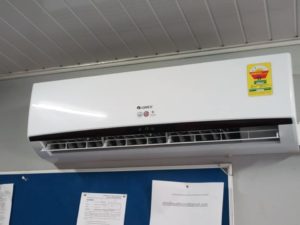 Madam Esther Tetteh, the Administrator of the Child Health Department of the Korle-Bu Teaching Hospital, who commended MiDA, said the initiative has brought them a big relief.

Besides the hottest environment the health personnel at the Child Health Department worked in, Madam Esther Tetteh said getting some of the non-functional fans in particular to be repaired was a headache because they were of different brands. She said getting the one’s MiDA has provided to be repaired in future would be easier because they are of the same brand.

“The fans which used to blow hot air is now blowing fresh air. So we thank MiDA,” she stated.

Communications and Head of Outreach Programme at MiDA, Pamela Djamson Tettey commended citizens of US, whose taxes the Millennium Challenge Corporation is supporting MiDA to implement its compact projects. 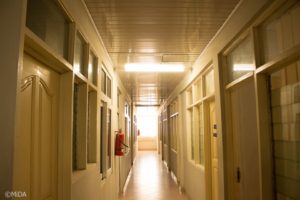