The Managing Director of Ghana’s strategic oil company, Bulk Oil Storage and Transportation (BOST) Company Limited, Edwin A. Provencal says he is optimistic the company will experience a financial turnaround this year and beyond and thus start paying dividend to government in the future.

The strategic national oil company in the West African nation has been making operational losses amount since 2013, but Edwin Provencal, who was appointed barely four months ago, believes the era where the company recorded operational losses are over.

“Hopefully, 2019 will be the last year we will make a loss. We have been making losses all the past years. This year, we will break even and subsequent years we will start paying dividend to the government,” Mr Provencal opined.

Speaking at a media engagement recently, Mr Provencal noted that within the few months he took over as Managing Director of BOST, he and his team have instituted cost cutting measures in place to reduce expenditure in order to ensure that BOST runs efficiently.

He mentioned that foreign travel for training of BOST technical staff have been cancelled, saying training will be procured locally from TOR and where possible from other West African countries.

He added the new management had also made it a plan not to engage in any trading that would, in the end, result in losses.

He claimed these new initiatives have already started yielding some positive results.

“Since we came, every trade we have done has yielded profit because the process we have put in place which was supported by the board is the fact that every parcel or cargo should have a business case and that business case, should be a net positive. If it’s not positive, we will not trade. We’re not going to trade on the margin…we don’t want to make losses. Even though forex can erode so much that you can make some losses but apart from unanticipated forex losses, I don’t think we will be trading at a loss.”

Established in 1993 as a strategic stock keeping company, BOST has a 361-km pipeline infrastructure along the eastern and northern corridors of Ghana, four barges, a tugboat and fifty-one petroleum storage tanks totalling 425,000 square metres.

Sadly, 15 out of the 51 tanks have been decommissioned as a result of malfunctioning component while 86 km out of 361km of pipeline infrastructure is inactive. Additionally,
two out of the four barges have also been grounded.

Mr Provencal, who expressed serious concern about perceived corruption at BOST, which had triggered bad publicity for the company in the past, noted that BOST had not been able to attract international investors because of that as well as the US$60 million legacy debts sitting in the company’s accounting books.

He argued that if the legacy debts is taken care of, it will boost the credibility of BOST to go to attract investors.

To him, “once, the legacy debts are settled, we will be very attractive to investors and when BOST margin is increased, we will be able to maintain and build additional infrastructure and within two years, we will be making huge revenue for the country.”

He added as part of his activities to transform BOST, they need to build the infrastructure needed to transport not only gasoline and gasoil but also for the gas; thus, going forward, they may need investment for other types of infrastructure and network.

He reiterated that “we look forward to building the infrastructure needed to transport not only gasoline and gasoil but also for the gas; so, going forward, we may need investment for other types of infrastructure and the network. 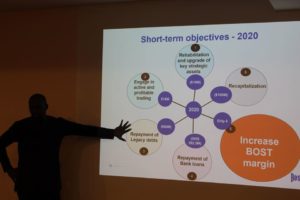 Ghana: COPEC Calls For Dissolution Of BOST Board