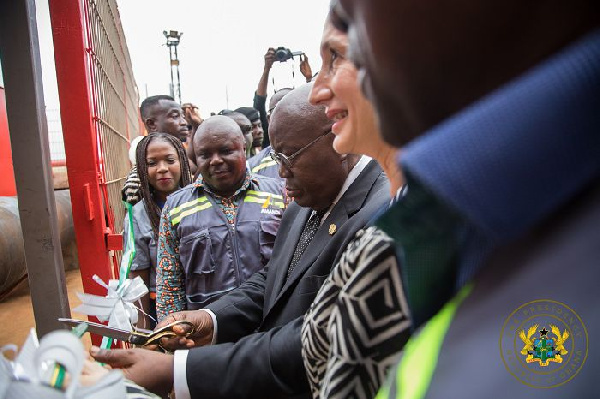 Ghana’s President Nana Akufo-Addo says the decision to switch 470MW Karpowership from depending on heavy fuel to natural gas is likely to save electricity users an amount of $170.5 million per year, and a projected amount of $1.2 billion over the remaining term of the contract.

He said in line with government’s policy of promoting the use of gas as the primary fuel for power generation, the 470-megawatt Karpowership is now running on natural gas, instead of Heavy Fuel Oil (HFO), for the generation of electricity.

“In line with government’s policy of promoting the use of gas as the primary fuel for power generation, the 450-megawatt Karpowership is now running natural gas, instead of Heavy Fuel Oil (HFO), for the generation of electricity.

“This follows the relocation of the Karpowership from its original location in Tema to the Sekondi Naval Base, in the Western Region, and the successful conversion of 90% of its engines to run on natural gas. As a result, Ghana will save a monthly take-or-pay cost of $40 million, resulting in projected annual savings to the country of $480 million. 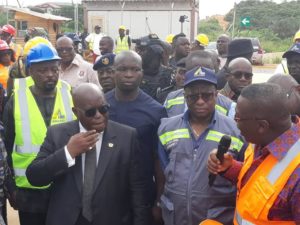 “Specifically, the switch of the Karpowership to natural gas will save electricity users an amount of $170.5 million per year, and a projected amount of $1.2 billion over the remaining term of the contract, by way of reduced electricity charges to consumers.

Commissioning the facility on Saturday, 7th December, 2019, in Secondi in the Western Region, President of the West African nation said “the arrangement that we have made with the companies is that the gas that comes out of the ground belongs to us. We are not paying for it. If it is ours, we should use it.”

Additionally, the President stated that the conversion is to ensure the maximum utilisation of indigenous gas (OCTP gas) in the Western Region, “to reduce, to the barest minimum, or to eliminate the financial consequences under the take-or-pay obligation.”

Explaining the rationale for the relocation of Karpowership, he noted that the Western Region “is where the gas of our country originates. So, the gas is right next door, and it can feed the facility easily. There are several savings that come out as a result, now that we are going to use gas as the primary source of power generation in the country. We are talking significant sums of money over the course of the next 10 years. We are looking at something in excess of $1 billion worth of savings in the generation of power via gas”.

As a result of this, President Akufo-Addo explained that the use of natural gas “helps bring down the cost of electricity, saves our country, and makes it possible for us to look at a secure source of powering the transformation of our country’s economy and for the industrial development of Ghana. That is our main goal.” 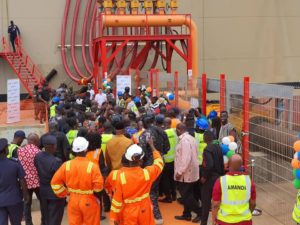 With Government determined to move the country away from being mere producers and exporters of raw materials, the President indicated that stable, affordable and reliable power is required.

Reiterating the commitment of his Government to putting Ghana on a sound footing, he stressed that the development that is going to take place in Ghana over the years ahead is one that will not only benefit all sections of our society, but will also be irreversible.

The President thanked the “competent people” at GNPC, VRA, GRIDCo, Ghana Gas, and the Electricity Company of Ghana “for doing an exceptionally good job in trying to protect our nation and its economic potential and development.”