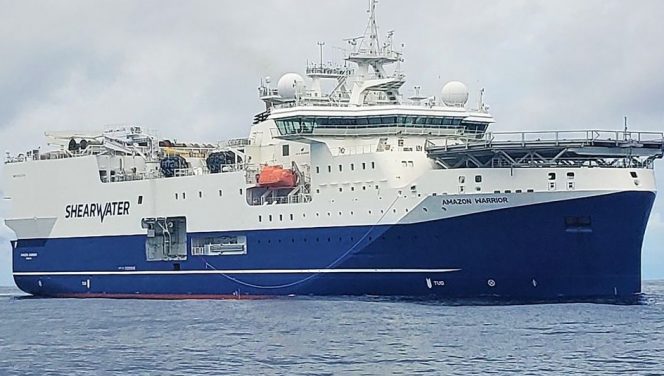 The survey will now employ two Shearwater-owned vessels instead of only one.

It would be recalled that in September 2019, Shearwater was awarded a large survey in South America. At the time, the name of the client was left unknown. The company said the six-month project would be acquired by the Amazon Warrior vessel.

Later, at the end of October, TGS said it would undertake a new 3D multi-client project in the Malvinas Basin offshore Argentina. TGS said the survey would employ one Shearwater vessel, with operations set to begin in the fourth quarter of 2019 and run until the second quarter of 2020.

In a statement on Wednesday, Shearwater announced an expansion of the previously announced South America survey to two vessels and also confirmed this survey was for TGS in Argentina.

Shearwater added that the additional phase was for five months bringing the total award to 11-vessel months. One of Shearwater’s high capacity seismic vessels will be used for the project, capable of deploying large streamer spreads in tough environments.

“We are very pleased to see a second vessel added to the TGS Argentina program,” Irene Waage Basili, the CEO of Shearwater GeoServices said.

“Market visibility for 2020 has increased significantly and clients are booking capacity earlier than in previous years.”

TGS said that the initial products would be available in early 2021, with final products slated for H2 2021. The project is supported by industry funding.

Kristian Johansen, CEO at TGS, commented, “We are delighted to announce the expansion of the Malvinas 3D project. The increased commitment from clients to fund new projects offshore Argentina demonstrates the value that E&Ps place in seismic as a vital tool to make informed drilling decisions.”