The Chamber of Petroleum Consumers, a consumer advocacy group in the Republic of Ghana, is calling on the President of the West African nation, His Excellency Nana Akufo-Addo, to, as a matter of urgency, initiate investigations into the processes leading to what it described as wanton dissipation of the tax payers’ monies by the country’s national oil company, Ghana National Petroleum Corporation (GNPC).

The call comes in the wake of an internal memo which revealed how the corporation has approved over GHS 2.7m sponsorship package for some institutions including the 20th anniversary celebration of the Okyenhene and Rebecca Akufo-Addo Foundation, a foundation owned by Ghana’s First Lady. 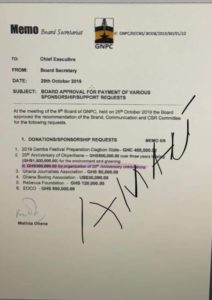 However, these donations have been met with criticisms from the Ghanaian public.

“This abuse of resources being held in trust by these corporations at a time the Central Government seems to be in dire need of revenues for its developmental projects cannot be over-emphasised and will need to be halted immediately to restore the needed confidence by the poor tax payer who is squeezed every now and then to generate these revenues the government needs,” COPEC said in a statement signed by Duncan Amoah, Executive Secretary of COPEC and copied to energynewsafrica.com.

“The priorities of the GNPC should be, going forward, clearly defined by a legislation as the Corporation seems to be gaining notoriety for such acts which usually contravene the posture of the state and Central Government within the economic context prevailing in Ghana,” the statement added.

Below is full statement:

GOVERNMENT MUST HALT AND INVESTIGATE THE BOARD AND MANAGEMENT OF GNPC ON UTILIZATION OF GENERATED OIL REVENUE.

The poor Ghanaian tax payer is once again confronted with another clear case of wanton dissipation of the scarce the nations resources by highly placed persons within the Ghana National Petroleum Corporation (GNPC) which sharply contrasts Government’s earlier reason for increasing fuel taxes as it insisted we needed revenue yet some in same breathe squandering the little available without any solid justification.

Chamber of Petroleum Consumers Ghana (COPEC-GH) has taken notice of an internal Memorandum dated 29th October 2019 from the Board Secretary under the Signature of one Matilda Ohene to the Chief Executive of the Ghana National Petroleum (GNPC) on the subject titled “Board Approval for payment of various sponsorship /Support Requests”.

The said memo indicates the granting of approvals to some supposed requests received with some stated amounts as indicated below:

II: GHS300,000.00 for organization of 20th Anniversary celebrations of Okyenhene

Our initial reaction was that of disbelief but the said memo has been confirmed by the manager for sustainability of the GNPC with a justification that these are quite normal application of the scarce resources been held in trust for Ghanaians by the corporation.

To this we call on the Government to immediately halt, and investigate the processes leading to wanton dissipation of these monies as contained in the memo, and to further take immediate action and sanctions against the Management and the Board of Directors of GNPC and to further take steps to consolidate all resources being held in trust by the corporation to forestall any further wanton dissipation of same as has been the case over the years with GNPC.

This abuse of resources being held in trust by these corporations at a time the Central Government seems to be in dire need of revenues for its developmental projects cannot be over emphasized and will need to be halted immediately to restore the needed confidence by the poor tax payer who is squeezed every now and then to generate these revenues the government needs.

The priorities of GNPC should be going forward clearly defined by a legislation as the Corporation seems to be gaining notoriety for such acts which usually contravenes the posture of the State and Central Government within the economic context prevailing in Ghana.

For the avoidance of doubt we also seek clarity on the following:

Does the Act and laws governing the operations of GNPC permits GNPC to on its own now finance and compromise other state investigate bodies such as EOCO who are expected to hold persons at the top of such corporations to account in the event of abuse of resources?

These state investigative Agencies such as EOCO who currently are expected to be investigating the board chairman of the very same GNPC and all other potential corrupt practices in such public corporations also enjoys government budgetary allocation and funding and as such could attract private support but another huge state funding by GNPC leaves a lot to be desired and confusion in the minds of right thinking society especially at the time EOCO is expected to investigating some highly placed officials of the said corporation.

Further, does such funding provision for Chieftaincy affairs in the country not constitute a pick and choose agenda which can lead to needless tensions and suspicions knowing very well how delicate the institution of chieftaincy is to ethnic and social matters as already, the chiefs and people of the Western Region of Ghana, where a larger chunk of our oil resources are extracted from are on record to have demanded a percentage share of the oil find but have till date not been given any, neither their roads fixed nor infrastructure improved by the oil money yet GNPC in an apparent show of some perceived biases is sponsoring other traditional areas in Northern and Eastern Regions of the Country by way of festivals and to also go green?

Dispensing such amounts to individuals and private organizations will sure have a certain effect on the economy and central government funding as these monies could have been easily channeled to other very important needs such social amenities provision in deprived communities to ease the pressures on the central government.

The absence of funding to undertake these development projects often force the central government to now resort to imposing heavier taxes which has often lead to increases in fuel prices at the pumps in the petroleum industry.

We believe that the public funds in the care of GNPC should be prudently invested and managed in building a robust upstream petroleum sector such that GNPC can in the very near future hold and maintain some of our oil wells without any foreign oil company taking a larger chunk of the shares of our own resources. And to complement in defraying incessant debts in the energy sector and ultimately relieve ordinary Ghanaians off these huge tax burdens as prevailing today.

We lastly note with deep concerns, that, this rather headless financial decision by the Board of GNPC to among other things, pay funds to EOCO which already enjoys government budgetary allocation could potentially compromise the investigative responsibilities of the state institution and further open the floodgates for all other traditional authorities within the country to also seek their share of the oil money and must be halted immediately forthwith.