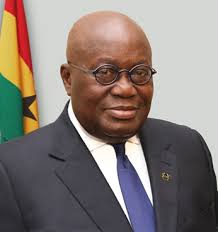 It has emerged that Millennium Challenge Corporation (MCC), a US agency which is providing funding for Ghana’s Power Compact II, has demanded that the President Akufo-Addo-administration reinstate the suspended Power Distribution Services (PDS) Company by October 30, 2019, energynewsafrica.com can confirm.

The MCC’s demand follows a discussion between officials of Government of Ghana and the MCC in New York in September 22-24, 2019 and Washington DC on October 15-18, 2019.

In a letter signed by the Acting Vice President of the Department of Compact Operations for the Millenium Challenge Corporation (MCC), Kyeh Kim, it said: “Government of Ghana formally announcing the reinstatement of PDS concession right under the transaction arrangements – (deadline 30th October 2019), Lift the suspension (lease and assignment agreement, the bulk supply agreement and the government support agreement) sanctions on all three, Cause the energy commission to lift the suspension of PDS retail supplier license.”

The MCC’s letter also demanded an immediate reversal of the ban placed on PDS by the Energy Commission.

The letter, which is said to be a direct response to the Finance Minister, Ken Ofori Atta’s statement on October 18, further ordered the government to authorise the resumption of PDS’ activities as stipulated by the compact agreement. 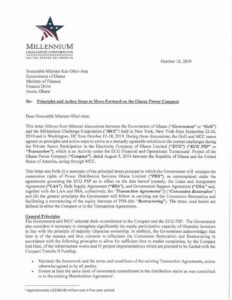 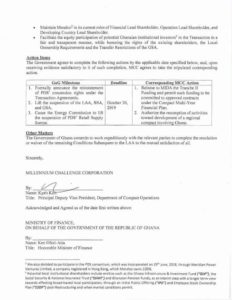