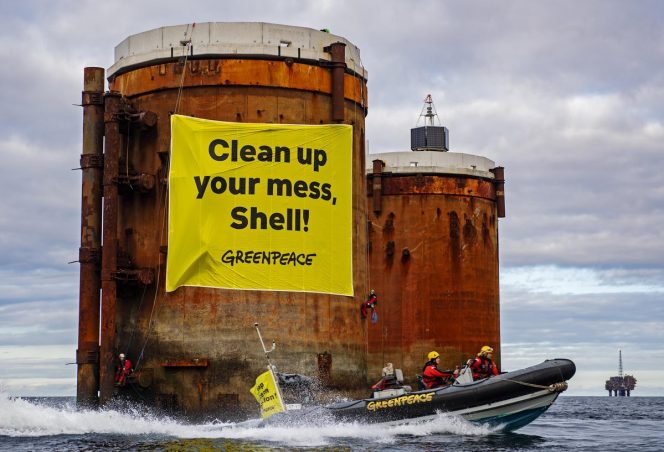 Greenpeace activists from the Netherlands, Germany, and Denmark boarded two oil platforms in Shell’s Brent field on Monday in what they say is a protest against plans by the company to leave parts of old oil structures with 11,000 tonnes of oil in the North Sea,Offshoreenergytoday.com reports.

Greenpeace said in a statement on Monday that its climbers, supported by the Greenpeace ship Rainbow Warrior, had scaled Brent Alpha and Bravo and hung banners saying, ‘Shell, clean up your mess!’ and ‘Stop Ocean Pollution’.

According to Greenpeace, a ban on dumping installations and platforms in the North East Atlantic Ocean was agreed in 1998 by all members of the OSPAR Commission and Shell has requested an exemption from the UK government.

“Shell’s plans are a scandal and go against international agreements to protect the environment. With escalating climate emergency, biodiversity loss and species extinction, we need healthy oceans more than ever. Abandoning thousands of tonnes of oil in ageing concrete will sooner or later pollute the sea. Shell must be stopped,” Dr Christian Bussau, Greenpeace campaigner on board the Rainbow Warrior said.

“We urge OSPAR governments to protect the ocean and not cave in to corporate pressure.”

Germany & Netherlands objecGreenpeace stated: “The UK government is willing to approve Shell’s plans when OSPAR meets in London on October 18. Germany has filed an official objection. The Netherlands will also object and the European Commission has raised serious concerns.”

Namely, Dutch infrastructure minister, Cora van Nieuwenhuizen, earlier in October sent a letter to the Parliament about the country’s position on cleaning up Shell’s oil platforms in the North Sea, saying it was consistent with that of Germany, which has already objected.

She said that, as a party to the OSPAR treaty, the Netherlands would object to the UK’s intention to grant Shell a license to abandon Brent platforms foundations with contaminated material in them.

“The UK government cannot claim to be a global oceans champion while allowing Shell to dump thousands of tonnes of oil in the North Sea,” said Dr Doug Parr, Greenpeace UK’s chief scientist.

“If ministers allow Shell to bend the rules, this will set a dangerous precedent for the decommissioning of hundreds of ageing North Sea platforms in the coming years. Shell made billions from drilling for oil in this region – they shouldn’t be allowed to scrimp and save on the clean-up at the expense of our marine environment.”

“Oil in the base of Shell’s platforms will reach the sea as the concrete structures rot and collapse. Shell’s plans leave a ticking time bomb and that is totally irresponsible,” added Bussau.

In 1995, public support for the Brent Spar campaign pushed Shell to agree to dismantle the oil tank and loading platform on land instead of dumping it in the sea. The campaign also led to OSPAR’s decision in 1998 to ban such dumping in the North East Atlantic.

“Shell is directly fuelling the climate emergency that is causing more extreme storms, floods, droughts and wildfires and bringing misery to millions of people around the world. The company’s reckless business threatens some of the world’s most important ecosystems with extinction and has to be stopped. For us to have a future, toxic oil companies like Shell must have no future, said Bussau, who was also part of the 1995 Brent Spar protest.

Shell submitted its decommissioning program for the Brent oil and gas field to the authorities in February 2017. The Brent decommissioning program recommended the upper steel jacket on the Brent Alpha platform to be removed, along with the topsides of the four Brent platforms, debris lying on the seabed, and the attic oil contained within the concrete storage cells of the gravity base structures.

Shell has already removed the Brent Delta and Brent Bravo platform topsides in April 2017 and June 2019, respectively. Both were removed using the Allseas-owned Pioneering Spirit vessel