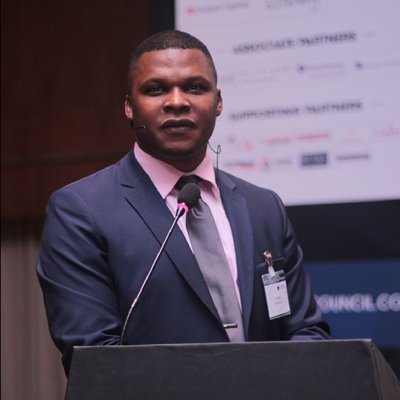 A leading African Energy Attorney and founder and CEO of Pan-African corporate law conglomerate, Centurion Law Group, NJ Ayuk says he does not believe in handouts as a long-term strategy for impoverished people or nations.

Rather, he thinks that the companies working on the continent have a responsibility to help their host nations build the infrastructure necessary to expand industrialization.

Ayuk who is also the Executive Chairman of the African Energy Chamber expressed these views in his new book titled: “Billions at Play: The Future of African Energy” which is expected to be launched in October 2019.

Commenting on the yet to be launched book, Mr Bruce Falkenstein, who is the Joint Operations Manager of License Management & Compliance for LUKOIL, shared the views of Ayuk, which is the focus of chapter 10 in Ayuk’s new book.

Falkenstein has a 40-year career working in all facets of the international oil and gas industry.  With regard to Africa, he has extensive experience managing offshore blocks in Côte d’Ivoire, Equatorial Guinea, Ghana, Cameroon, and Sierra Leone for LUKOIL and Vanco Exploration, and had great success in the exploration and development of oil fields in Egypt for Amoco (BP) in the 1980s and 90s.

“There is no getting around it: Africa is exporting raw materials it could be refining and processing, if it only had the capabilities, but not everyone is willing to admit that with the level of candor Ayuk does,” Falkenstein said. “What’s more, he has correctly linked infrastructure deficits to the lack of industrialization and describes workable solutions based on examples from around the world,” he said in a press released copied to energynewsafrica.com by APO Group.

Ayuk sees the irony in oil and gas produced in Africa being sent away to be refined, then returned as finished products that Africans pay a premium for. Roads, railways, and reliable electricity are key to building a manufacturing base in Africa, but they take resources—some of which should be provided by the international energy companies making millions on the continent, he argues.

“It is simply not ethical for American, French, Italian, and other companies to come here and not help lift people out of poverty,” Falkenstein said. “True, they employ indigenous workers and provide training, but one of the biggest benefits would be in committing to help build sustainable infrastructure and physical assets that will remain a plus for the people long after the companies have pulled up stakes and left Africa, and I will add that sustainability of the work force, also a key component of a venture’s ‘built assets’, is critical to the future industrial output of the nations and currently many of the work force assets are left behind without local supporting employment agencies after the stakes are pulled up.  Sustainability is only achieved through alignment of the projects with both the real needs of the impacted communities and the spectrum of government stakeholders.

As Ayuk alludes to in chapter 9, Calling All Leaders! More on Good Governance, part of good governance requires that good leadership needs to be able to recognize the upfront additional cost to achieve sustainability results in reduced project risks and improved long-term project stability and economics.”

In Billions at Play: The Future of African Energy, Ayuk does not overlook the issues Africa has caused for itself, including unscrupulous leaders who have siphoned off funds that were intended for the public good. At the same time, as Falkenstein noted, he points out how countries like Kenya have created an enabling environment for manufacturing that supports economic diversification and should reduce the country’s exposure to external shocks, including oil and gas price volatility.

“In NJ Ayuk’s world, there are few villains, just people and businesses who can and need to do more,” Falkenstein said. “That is what makes his book so compelling—it is, truly, fair and balanced. Learning from Ayuk will put you on the successful path in Africa. His first book, Big Barrels: African Oil and Gas and the Quest for Prosperity, should be within close reach for any serious oil and gas executive and negotiator. With that said, Ayuk’s newest book needs to be in even closer reach as each of you pursue your own quest for Billions.”