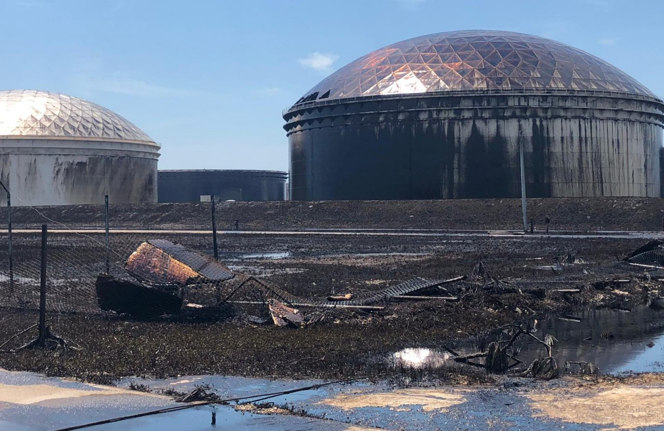 Norwegian oil and gas company Equinor has reported that there is currently no observed leakage of oil to the sea from its South Riding Point terminal in the Bahamas.

In the aftermath of Hurricane Dorian, Equinor said earlier this week it would clean up the oil spills from its south Riding Point oil terminal, spilled due to a damage caused by the hurricane.

In an update reported by offshoreenergytoday.com Wednesday, Equinor said that the situation for the people on the Bahamas continues to be very challenging.

Equinor has an ongoing operation to respond to and clean up the oil spill in the Bahamas.

Equinor has a team working at South Riding Point terminal Bahamas including an onshore response team with oil spill technical specialist. In total more than 200 personnel are working with the response in Bahamas, the US, and in Norway. Their objective is to address the situation at the South Riding Point terminal and to ensure the safety and well-being of employees and their families.

In order to support the broader relief efforts on the Bahamas, Equinor has decided to donate 1 million US dollars to one or more relief organizations involved in the response for the Bahamas. The organizations will be identified in collaboration with Equinor’s local management in the Bahamas.

Two vessels are mobilized for the response at the South Riding Point terminal with 42 personnel and onshore oil spill recovery equipment. The first vessel arrived at the terminal in the evening of September 10.

The second vessel is scheduled to arrive on location on September 12. The vessels include, containment booms and hundreds of bails of various absorbent pads/rolls, oil spill recovery skimmers, wash pumps, roll off boxes for collection generated waste, light towers, and smaller boats and protection equipment.

Two trucks have started recovery and transport of bulk free-standing oil on the ground to one of the tanks at the terminal.

Equinor has completed the initial surveillance of the terminal and surrounding areas from the air and the ground. There is currently no observed leakage of oil to the sea from the South Riding Point terminal, according to Equinor.

Aerial surveillance has identified potential product in open waters 70-80 kilometers north east of the terminal within Long Point Bight close to Little Abaco Island. There are also indications that the product may have impacted a section of the coastline.

Although the source of this product is not known, Equinor will investigate and further evaluate necessary actions, including mobilization of suitable equipment and resources.

The Oil Giant Focusing Only On Africa