Transport operators in the Republic of Ghana, West Africa, have adjusted their fares upward by 10 percent effective Monday, 16th September, 2019.

The increment follows recent hikes in petroleum prices, which a section of the population including petroleum workers have kicked against with a claim that these increases are worsening their plight.

Fuel prices at the pump shot up last Monday from GHc5.19 per litre to about GHc5.39 for a litre, representing a 3.7% jump in previous figures at the pump.

The statement explained that the increment is to accommodate predominantly an increase in the fuel prices. 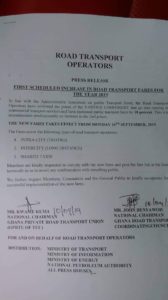 ExxonMobil To Hold Annual Meeting of Shareholders On May 29