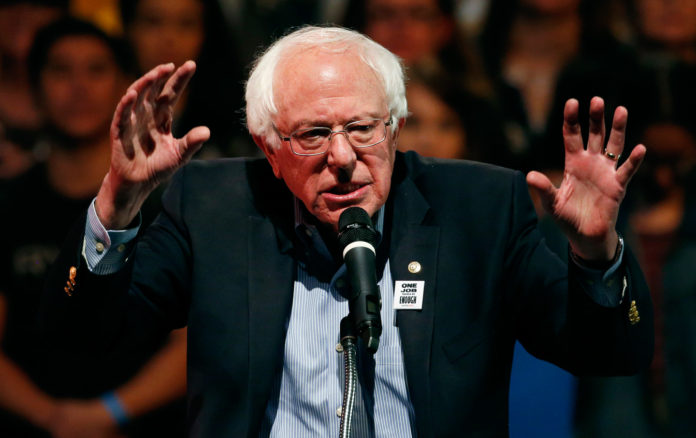 U.S. presidential candidate Bernie Sanders has released a $16.3 trillion plan to tackle climate change. He promises the U.S. will reach 100 percent renewable energy for electricity and transportation by no later than 2030. The plan also sees “taking on” the fossil fuel industry, by slapping it with massive taxes and penalties, and prosecution for damage caused.

Sanders’ plan – labeled the most progressive, or the most radical, or “budget annihilating,” depending on who you ask – envisions a ban on fracking, mountaintop removal coal mining, offshore drilling, and imports and exports of fossil fuels, among others.

“Our coal and natural gas are contributing to increased emissions abroad. We will also end the importation of fossil fuels to end incentives for extraction around the world. We can meet our energy needs and ensure energy security and independence without these imports,” the text of the plan released Thursday says.

“We will ensure fossil fuels stay in the ground by stopping the permitting and building of new fossil fuel extraction, transportation, and refining infrastructure,” the plan labeled “Green New Plan” reads.

Sanders would if elected, work to see offshore drilling banned: “If we are serious about moving beyond oil toward energy independence, lowering the cost of energy, combating climate change, and cutting carbon pollution emissions, then we must ban offshore drilling.

“If there is a lesson to be learned from the 2010 BP oil spill disaster, it is that Congress must not open new areas to offshore oil drilling.”

He would aim to   transform the U.S. energy system away from fossil fuels to 100 percent renewable energy, like wind, solar, and geothermal, and also to “fully decarbonize the economy by 2050 at latest”

The plan envisions $2.09 trillion in grants to low- and moderate-income families and small businesses to trade in their fossil fuel-dependent vehicles for new electric vehicles; $85.6 billion building a national electric vehicle charging infrastructure network; $407 billion in grants for states to help school districts and transit agencies replace all school and transit buses with electric buses; $216 billion to replace all diesel tractor-trailer trucks with fast-charging and long-range electric trucks

He would commit to reducing emissions throughout the world, including providing $200 billion to the Green Climate Fund, rejoining the Paris Agreement, “and reasserting the United States’ leadership in the global fight against climate change.”

The text of the plan released on Thursday slams the fossil fuel bosses, calls them greedy and says they’re standing in the way of climate action.

“We need a president who has the courage, the vision, and the record to face down the greed of fossil fuel executives and the billionaire class who stand in the way of climate action. We need a president who welcomes their hatred. Bernie will lead our country to enact the Green New Deal and bring the world together to defeat the existential threat of climate change,” the text says.

The plan, in which “fossil fuel” appears 82 times, mostly in the negative context, envisions “a just transition” for workers employed in the fossil fuel industry.

“This plan will prioritize the fossil fuel workers who have powered our economy for more than a century and who have too often been neglected by corporations and politicians. We will guarantee five years of a worker’s current salary, housing assistance, job training, health care, pension support, and priority job placement for any displaced worker, as well as early retirement support for those who choose it or can no longer work,” the plan reads.

Who will pay for it?

“We cannot accomplish any of these goals without taking on the fossil fuel billionaires whose greed lies at the very heart of the climate crisis. These executives have spent hundreds of millions of dollars protecting their profits at the expense of our future, and they will do whatever it takes to squeeze every last penny out of the Earth,” Sanders’ manifesto reads.

It adds: “Bernie promises to go further than any other presidential candidate in history to end the fossil fuel industry’s greed, including by making the industry pay for its pollution and prosecuting it for the damage it has caused.”

According to the text, the plan would pay for itself over 15 years, by among others, making the fossil fuel industry pay for pollution, through litigation, fees, and taxes, and eliminating federal fossil fuel subsidies, and collecting new income tax revenue from the 20 million new jobs created by the plan.