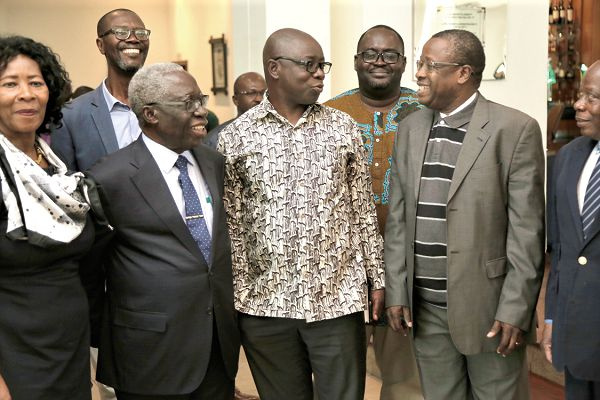 The fifth meeting on the Ghana/Togo Maritime Boundary Negotiations has been held in Accra with a call on both parties to work towards an amicable solution.

‘It is my fervent wish for both Parties to consider the fraternal relationship among our common people’s and the already existing economic activities to reach an agreement based on negotiations in good faith,” Mr. Yaw Osafo Maafo, Senior Minister said.

The Senior Minister informed that the Presidents of Ghana and Togo, in their bid to solve the unpass, desired that the good neighborliness and peaceful co-existence between the two countries became the framework and basis on which the entire process of negotiations was done.

“The underlying principle is to derive an equitable outcome that is grounded in international law, utilizing all the established principles governing matters of this nature,” Mr. Osafo-Maafo said.

He informed that significant progress was made during the last meeting held in Lome during which both parties agreed that survey teams should jointly explore various possibilities to establish the Land Boundary Terminus (LBT) or Border Pillar 1 as a prerequisite for drawing the maritime boundary between the two countries.

Mr. Osafo-Maafo indicated that the survey teams met at Aflao to adopt a common methodology for the conduct of the fieldwork to establish the LBT.

He informed that both survey teams presented a report of the 1929 Boundary Commission signed by the French and British Commissioners and the related map, and agreed to use the report as their working document.

Endorsing the working document as a good reference point, Mr. Osafo-Maafo said, “I wish to emphasize that Ghana views these processes as essential in ensuring that the interests of our two countries are protected and optimised.

The Senior Minister drew the attention of the parties at the meeting to the outstanding issue of Provisional Arrangements which should be agreed in accordance with the United Nations Convention on the Law of the Sea (UNCLOS), whilst negotiations for the formal delimitation of the maritime boundary continued.

He added that, “In this regard, I wish to suggest that the two countries continue to work in the maritime domains that they have hitherto been working until the protest by Togo in December, 2016.

He wished that the two days meeting would build on previous meetings “and lead us closer to bringing finality to the matter.”

In an interview with the Ghana News Agency, Mr. Osafo-Maafo indicated that quest for hydro-carbons which was prevalent at the crest of the ocean has made nations rise up to the challenge of protecting their territorial waters.

He, therefore, indicated that a final determination on the matter was necessary to prevent possible disputes over rights to mine minerals on a country’s sea bed.

The Republic of Togo raised concerns in 2016 about the demarcation of the maritime boundary between Ghana and Togo.

The Presidents of the two countries intervened to prevent a conflict situation from developing and a committee was set to agree on a common boundary demarcation.

The outcome of the current two-day committee meeting would determine whether the matter would be settled amicably or would have to be sent to an international forum for determination.

Other Ghanaian dignitaries at the opening meeting were the Minister of Energy, Mr. John Peter Amewu, the Minister of Lands and Natural Resources, Mr. Kweku Asomah-Cheremeh, and the Deputy Minister of Foreign Affairs and Regional Integration, Mr. Mohammed Habibu Tijani.