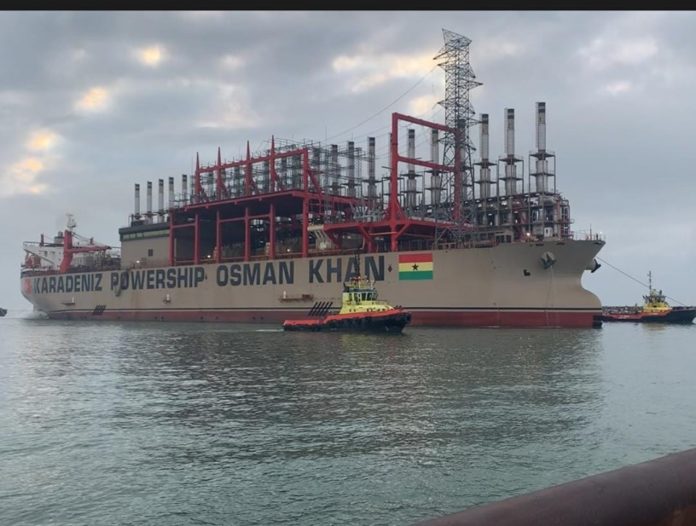 Work has begun to connect the transmission lines to allow the Karadeniz Powership Osman Khan, simply referred to as Karpowership, to resume the supply of power to the national grid after relocating from Tema to Takoradi.

The 470-megawatts (MW) Karadeniz Powership which is being managed by Karpowership Ghana Company Limited arrived at the anchorage of the Home Port of the Western Naval Command, Sekondi in the Sekondi-Takoradi metropolis last Thursday evening.

The powership, which propelled itself from Tema to the Western Region and in the company of two tugboats, arrived at the anchorage at 10:30 p.m. last Thursday and early yesterday morning, it entered port and positioned at a jetty, the size of a football field.

Managing Director of Karpowership Ghana Company Limited, Mr Volkan Buyukbicer, in an interview with journalists said after the successful voyage, work would begin immediately and that the relocation was a win for Ghana and the company.

“I must say today we have achieved what we describe as a ‘big move’, which is very important for the energy sector recovery programme to enable the country to utilise the volume of gas produced offshore Ghana,” he said.

After the successful mooring, “we will immediately move in to connect to the transmission lines already in place to resume supply of the 450MW to the national grid.”

“We have arrived, we have started work, but we will work faster to beat the 17-day timeline we have given to the nation and I must say at the moment we are on course,” he said.

Mr Buyukbicer said the use of natural gas was environmentally friendly because it burned cleaner than other fossil fuels and gas came with enormous benefits not only to them as power generators but also the nation as a whole.

“When we talk about the economy and natural gas I will say it’s cheaper compared to other fossil fuels and the country will, through the use of the gas, save millions of dollars and help government to meet its contractual agreements with gas producers,” he said.

At the port of the Navy, workers were still working on pipelines that would connect the gas to the powership.

The lines stretch to cover a distance of about 10 kilometres made up of 1.5 kilometres of marine and 8.5 onshore pipeline from the metering station of the Ghana National Gas Company (Ghana Gas) to the shore at Ngyeresia.

The powership, which generates 450MW power to the national grid, is currently off after disconnecting from the grid in order to set sail to Sekondi.

Immediately after the reconnection to the grid at its current location, the powership would continue to run on heavy fuel oil (HFO) until in the middle of November 2019, when it will be connected to off-take the natural gas from the country’s oil fields.

Construction works on the jetty at Sekondi started in August last year.

It also saw the construction, expansion and reinforcement of the breakwater from two metres to four.

When connected, the generating units will be supplied with the 90 million standard cubic feet of gas daily (MMSCFD), which will reduce the cost of transporting gas to Tema and make gas cheaper compared to HFO.