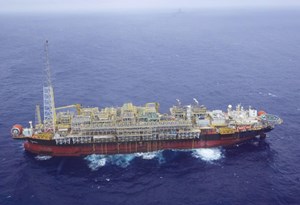 MODEC has announced that an affiliate has issued a project bond in the international capital markets outside Japan to refinance an FPSO chartered to the TUPI consortium led by Petrobras in Brazil, with the aim of strategically diversifying its financing sources for MODEC’s entire FPSO charter business.

In recent years, the number of FPSO charter projects simultaneously executed by MODEC is increasing and the scale of financing for these projects is also expanding.

In response to these changes in the business environment, the aims of issuing the project bond are to enhance MODEC Group’s financial stability by diversifying its financing sources for FPSO projects, as well as to secure financing flexibility for the future growth of the MODEC Group.

This project bond was issued for the FPSO Cidade de Mangaratiba MV24 which has been deployed and is currently in operation at the Iracema Sul (formerly Cernambi Sul) oil field, operated by Petrobras, in the giant “pre-salt” region offshore Brazil. The shareholders of Cernambi Sul MV24 B.V., which owns the FPSO, are MODEC, Mitsui & Co., Ltd., Mitsui O.S.K. Lines, Ltd. and Marubeni Corporation.

The FPSO is currently chartered by a consortium formed by Petrobras (65%), Royal Dutch Shell plc (25%) and Petrogal Brasil S.A. (10%) under a fixed-price charter contract that extends until 2034. The FPSO achieved the first oil production in October 2014 at which time, the 20-Year charter of the FPSO began.

MODEC was responsible for the engineering, procurement, construction, mobilization and installation of the FPSO, as well as a MODEC Group company in Brazil is providing operations and maintenance services for the FPSO. The FPSO, a best in class FPSO both globally and in Brazil, accounts for approximately 4% of Brazil’s daily hydrocarbon production.

The capital cost for the construction of the FPSO was originally financed by equity capital from the four Sponsors of Cernambi Sul MV24 B.V., as well as by project finance from the Japan Bank for International Cooperation (JBIC) and commercial banks. Proceeds from the issuance of the project bond were used to refinance the project finance and make a distribution to Sponsors.

This transaction marks the first project bond for an FPSO project sold in the Regulation S/Rule 144A market, and was sold to a broad range of international investors outside Japan, mainly in Europe and the United States. Total investor demand for the issue was approximately 2-times the issue amount of the $1.1 billion project bond. The strong reception for the bond in the international market highlights MODEC’s highly praised asset management capabilities as well as operations and maintenance for FPSOs.

MODEC is currently carrying out 11 FPSO charter projects simultaneously all over the world, and four more FPSOs are currently under construction. With diverse means of financing, which can be applied to both existing and new charter projects, MODEC is able to respond more flexibly to the recent burgeoning demand for FPSOs and thus establish a robust position in the FPSO industry.

Power outages: Enough of the excuses – Buah to government