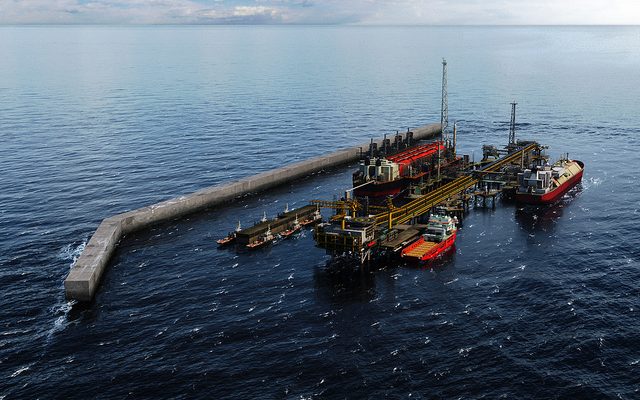 With its long and illustrious record dating back over half a century, Africa remains one of the world’s largest liquefied natural gas (LNG) exporters. While few have floundered in recent times, new final investment decisions (FIDs) are occurring for major LNG export projects across the continent and the near term should see more LNG projects being developed in Africa.

Cameroun has already joined the list of 20 countries around the world which exports LNG, with the first export taking place in May 2018.

The project is the first-of-a-kind, involving the conversion of the Hilli Episeyo, a 1975-built Moss LNG carrier with a storage capacity of 125,000 cubic meter (m³) into a floating liquefied plant. In Mozambique, Eni’s Coral South floating LNG project achieved FID in 2017 and LNG production is expected to occur by 2022.

Anadarko Petroleum Corporation announced a FID on its onshore LNG plant in June 2018, and is well positioned to complete the project financing process. ExxonMobil is also moving forward with its onshore Rovuma LNG project after obtaining approval from government on its plan of development (PoD), marking another significant step towards a FID in later this year.

Another LNG project that industry players are keeping close eye on after gaining FID for its first phase; is the Greater Tortue Ahmeyim, a cross border project located offshore Senegal and Mauritania. The cross-border development, a first for the two West African nations and Africa’s deepest offshore project at 2,000 meters below the sea’s surface, is on track to deliver first gas in the first half of 2022.

In the past few years, floating LNG (FLNG) projects gained favour in the LNG supply market because they were designed to lower capital investment and quickly monetize the development of gas resources in remote and sensitive offshore or near-shore locations. However, myriad of issues have made it difficult for several proposed projects to fare well; struggling to attract investors, buyers and financing, and sending a wrong signal to prospective projects.

On the global scale for example, a drastic reduction in exploration and development (E&P) over the last few years because of the oil price crash has yielded few significant gas discoveries. The consequences of major cost overruns at FLNG projects, such as Shell’s Prelude and Petronas’ PFLNG have also been felt by management and shareholders alike, casting a shadow over even projects which have taken FIDs, and currently under construction. Furthermore, the upcoming investment story in large capacity projects in the U.S. could see FLNG struggling to obtain partners, buyers and financing, despite establishing itself as a credible development option.

On the domestic front, Nigeria’s 10 million tpy Brass LNG project, and Olokola (OK) LNG project, are typical examples of LNG projects struggling to gain FID. One of the major setback to the development of these projects, is Nigeria’s gas reserves being entirely associated with oil fields, thus requiring extensive processing and infrastructure to produce LNG; adding to the already costly projects. Again, government’s inertia, risky business environment, and unfavorable fiscal agreements have added barriers to making FID in Nigeria. And there is no such good news for Ophir Energy who finally pulled the plug on its Fortuna FLNG project offshore Equatorial Guinea. The project failed to attract funding, given that FLNG is still a new technology, and that the banks were unwilling to back an Ophir-led project as opposed to established oil firms like Eni or BP’s projects.

In spite of these and other challenges, the International Energy Agency (IEA) estimates that Africa could overtake Russia as a global gas supplier by 2040, demonstrating the scale of opportunity should these obstacles be overcome.

Greater Tortue Ahmeyim is an offshore liquefied natural gas (LNG) project based on upstream gas production from the 2km-deep Tortue field which was discovered by Kosmos Energy in 2015 on the maritime border of Mauritania and Senegal.

An agreement between the Mauritanian and Senegalese governments and partners BP, Kosmos Energy, and national oil companies; Societe des Petroles du Senegal (Petrosen), and Societe Mauritanienne des Hydrocarbures (SMHPM) gave birth to the Greater Tortue Ahmeyim LNG project which is planned to provide LNG for global export as well as making gas available for domestic use.

The Greater Tortue project planned in three phases, is expected to produce gas from an ultra-deep-water subsea system and mid-water floating production, storage, and offloading (FPSO) vessel, which will process the gas, removing heavier hydrocarbon components. The gas will then be transferred to an FLNG facility at an innovative nearshore hub located on the maritime boundary.

The FLNG facility is designed to provide circa 2.5 million tonnes of LNG per annum on average, with the total gas resources in the field estimated to be around 20 trillion cubic feet. The initial subsea infrastructure, part of the first phase, connects the first four wells consolidated through production pipelines leading to this FPSO. Phases 2 and 3 will involve the further development of Tortue Ahmeyim field beyond Phase 1 of the development located in the C-8 block off the shore of Mauritania and the Saint-Louis Profond block offshore Senegal.

The two phases is expected to significantly expand capacity to deliver additional gas from an ultra-deep-water subsea system, tied back to mid-water gas processing platforms. The gas will then be transferred to pre-treatment and offshore LNG facilities located at the established Phase 1 hub.

BP holds a majority interest and operatorship among the four partners in the project, while BP Gas Marketing has been selected as the sole buyer for the investor partners’ LNG offtake for Tortue Ahmeyim Phase 1.

October 2018: KBR was awarded a front end engineering and design (FEED) by BP for Phase 1 of the field hub/terminal development. The agreement contains a mechanism to allow the transition of the contract to an engineering, procurement and construction management (EPCM) contract at a later date. KBR is expected to provide management of the quarters and utilities (QU) including telecoms systems FEED and provision of supplemental services (system engineering, interface oversight, technology planning, support and verification) of the hub/terminal for the project.

December 2018: Kosmos Energy and its partners announced an agreement on a FID for Phase 1 of the project. The decision was made by Kosmos, BP, Petrosen and SMHPM following a meeting between President Mohamed Ould Abdel Aziz of Mauritania and President Macky Sall of Senegal to agree final elements.

February 2019: Golar LNG Ltd.’s newly incorporated subsidiary, Gimi MS Corporation, signed a 20-year lease and operating agreement (LOA) with BP to provide an FLNG unit on charter basis to service the Greater Tortue Ahmeyim project. The unit is expected to liquefy gas as part of the first phase of the project when it begins production in 2022.
February 2019: Keppel Shipyard Ltd received the final notice to proceed (FNTP) from Gimi MS Corporation to commence full conversion for the Gimi floating LNG (FLNG) project.

The LNG carrier Gimi has since been relocated from layup to Keppel Shipyard in Singapore where conversion works are expected to start soon. The unit’s construction is estimated to cost roughly $1.3 billion, excluding financing costs.

April 2019: BP awarded KBR Inc.’s UK operating subsidiary the Pre-FEED Services contract for Phases 2 and 3 of the project, for the further development of the field beyond Phase 1. The agreement is to design offshore platforms and underwater pipelines to expand natural gas production that will be delivered to pre-treatment and offshore LNG facilities located at the established Phase 1 hub.

April 2019: TechnipFMC was contracted by BP for the development of the FPSO FEED for the LNG project. The contract for the Tortue Ahmeyim field development floating production storage and offloading unit includes a mechanism allowing it to transition into an engineering, procurement, construction and installation (EPCI) deal at a later stage. TechnipFMC is expected to work on defining the technology and equipment scope of the project.

May 2019: Baker Hughes, a GE company (BHGE), was awarded the contract to supply turbomachinery equipment for the first phase of the project, by Golar’s topsides contractor Black & Veatch (B&V) in the first quarter of the year. BHGE will provide the technology for four compressor trains for offshore gas liquefaction on board the LNG carrier Gimi.

July 2019: Kosmos Energy announced that the Greater Tortue Ahmeyim-1 well (GTA-1), drilled on the eastern anticline within the unit development area of Greater Tortue, has encountered approximately 30 meters of net gas pay in high-quality Albian reservoir, confirming the expectation that the gas resource at Greater Tortue Ahmeyim will continue to grow over time and could lead to further expansion of this world-scale project. While significant progress have been made since the Greater Tortue Ahmeyim project achieved FID for Phase 1 towards delivering first gas in the first half of 2022, it remains to be seen when the project’s financing process would be completed, and whether the project would not experience any delays and cost overrun.

Written by Paa Kwasi Anamua Sakyi, Institute for Energy Security (IES) ©2019
The writer has over 22 years of experience in the technical and management areas of Oil and Gas Management, Banking and Finance, and Mechanical Engineering; working in both the Gold Mining and Oil sector. He is currently working as an Oil Trader, Consultant, and Policy Analyst in the global energy sector. He serves as a resource to many global energy research firms, including Argus Media.