Ghana’s only refinery, Tema Oil Refinery, has offered explanation to why the refinery incurred the GHS186 million loss in the first four months of the 2019.

According to the management of the refinery, the amount was as a result of financial interest charges and exchange rates differences on TOR’s outstanding legacy debts yet to be paid from the Energy Sector Levies Act (ESLA) proceeds.

The explanation follows reports that the West African nation’s refinery had lost about GHS 186million in the first four months of 2019.

“TOR made a gross profit in the first quarter of this year, “indicating that TOR is a potentially profitable company,” a statement signed by Daniel Appiah, General Manager in –charge of Finance said.

The statement admitted that TOR has been facing liquidity challenges culminating in the company’s inability to implement its annual budgets.

“TOR’s revenue targets are not being achieved due to lack of working capital to procure crude oil for processing on a continuous basis. However, fixed costs continue to be incurred,” the statement added. 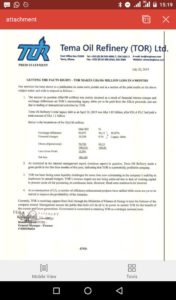 Below is TOR’s Variance Report

Ghana: I Have Never Had Telephone Conversation With Gabby Otchere-Darko, Other On Sharing PDS...