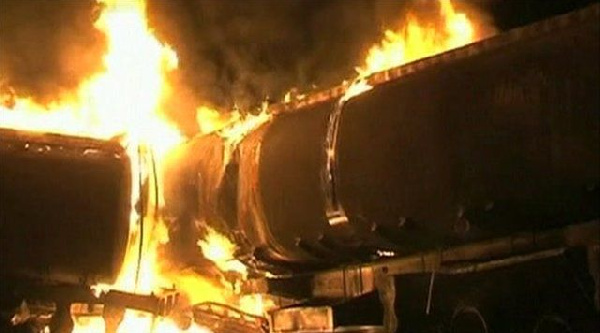 Police in the Republic of Ghana have arrested a tanker driver and his mate for setting ablaze a diesel tanker in a bush near Osino in the Eastern Region after they had emptied and sold its 54,000-litre diesel load.

The tanker, with GH¢280,260 worth of diesel from Fuel Trade in Tema, was headed for Yendi in the Northern Region but was diverted and its content sold in Accra, after which the suspects drove the empty tanker to Osino, where they set it ablaze.

The suspects are Awudu Yakubu, 34, the driver, and Isaac Boadi, 19.

An accomplice, Fataw Mohammed, a former driver employed by the truck owner and said to be the mastermind of the deal, is, however, on the run and the police have mounted an intensive search for his arrest.

The Deputy Director General of the Criminal Investigations Department (CID) of the Ghana Police Service, Assistant Commissioner of Police (ACP) Mr George Tweneboah, who disclosed this to the Daily Graphic, said the complainant in the case was an Accra businessman and transporter who dealt in petroleum products.

He said some time last year the complainant gave his DAF CF 460 truck, with registration number GS 264 14, to Awudu to drive and also engaged Boadi as his mate.

ACP Tweneboah said the two suspects had since been loading petroleum products to supply to a number of customers in different parts of the country.

He said they left Tema in the night and met the complainant at the Community 18 Junction on the Accra-Tema Motorway, where he gave them GH¢2,400 as their per diem to Yendi and back.

He said police investigations revealed that the suspects set off on the journey to Yendi, but on reaching the Accra end of the motorway, they claimed to have run short of fuel and so Yakubu parked the vehicle on the shoulders of the road and the mate was sent to buy fuel.

While Yakubu was waiting for the mate, Mohammed, the complainant’s other driver, went to meet Yakubu and they hatched a plan to sell the fuel and burn the tanker.

The three suspects took the fuel back to Tema, where they sold it to one Nana Yaw, and after their nefarious act, they drove the empty tanker to the Unity Oil Filling Station at Achimota and bought 75 litres of petrol which they put into gallons, put them in the truck and set off on the journey with the empty tanker.

On their way, ACP Tweneboah said, they drove to a spot between Osino and Anyinam in the Eastern Region, where they feigned an accident, depicting that the tanker had landed in a ditch because it was being driven at top speed.

He said the suspects poured the petrol that they had bought at Achimota on the head of the tanker and set it ablaze, after which Yakubu called the complainant’s secretary and told him that while they were on their way to Yendi, the truck had been involved in an accident.

The secretary then informed the complainant who, thinking that the driver and his mate had sustained injuries, quickly dispatched the secretary to attend to the two while he followed up later.

On reaching the scene of the supposed accident, the secretary detected that the tanker was empty.

By then the driver was nowhere to be found but the mate was sitting near the bushes by the burnt truck.

When the mate was asked about the whereabouts of the driver, he said the driver had asked him to wait while he rushed to Kumasi and back, the police said.

When the mate was asked to narrate what had led to the accident, he could not speak, but when probed further, he broke down and confessed that they had hatched a plan with Mohammed to sell the fuel and burn the tanker.

The owner of the truck then picked the mate from Osino to Accra, where he lodged a complaint at the CID Headquarters and handed the mate over to the police for further investigations.

Investigations by the police led to Yakubu’s arrest from his hideout in Kumasi and brought to Accra where, upon interrogation, he confessed to the crime and mentioned Mohammed as the mastermind of the whole plan.

The Head of the Intelligence Unit of the CID, Superintendent Ebenezer Nketsiah , advised tanker owners and businessmen to endeavour to do proper background checks on all prospective employees before engaging them.