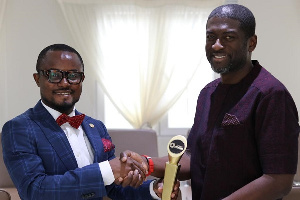 Chief Executives Network Ghana Limited, has lauded the Springfield Exploration and Production Limited and its Chief Executive Officer, Mr. Kevin Okyere for working hard to make a mark in the upstream petroleum industry in the country.

CEO of the network, Mr Ernest De-Graft Egyir, said it was admirable to find a Ghanaian in the area of oil and gas exploration pushing the frontiers for Ghanaian companies to emulate by building a strong capacity for the future of the sector locally; a feat which has eluded the nation as far as mining is concerned.

He said this when he led a team from his outfit to present the Business Person of the Year 2019, Offshore Petroleum- Oil and Gas Sector Award to Mr. Okyere at his office on Monday 27th May, in Accra.

The Chief Executives Excellence Award was introduced this year to run alongside the 4th Ghana CEOs Summit which took place at the Kempinski Gold Coast Hotel in Accra, from May 20-21st.

Mr Okyere was not available at the time of the Summit to receive his award from the Vice President, Dr. Mahamudu Bawumia, hence the visit.

A citation accompanying the award read in part “This award is to congratulate and recognize your hard work, commitment to quality achievements and help serve as a continual reminder of your achievements in the Ghanaian Business and Entrepreneurship terrain.

Under your sterling leadership, Springfield Group has established itself as a leader in its target markets in Ghana and beyond. Your excellent drive for hard work and business growth has helped you build a multi-faceted Ghanaian energy behemoth which is quite remarkable.” It said.

Mr De-Graft Egyir noted further that as an organization, the Chief Executives Network recognizes the important role synergy plays in shaping the direction and strengthening the capacity of local businesses to grow and contribute to the overall economy of Ghana, hence the annual summit to bring together captains of industry.

He said what Mr Okyere is doing will benefit the entire nation because his success will inspire other Ghanaian entrepreneurs to dare to venture into areas that have for so long been considered the preserve of foreigners, especially the upstream industry.

Touching on the award, he said it was symbolic of an outstanding performance and a statement that Ghanaians had seen Mr Okyere’s efforts and were highly encouraged and pleased to push him to go higher.

Responding to the gesture, Mr Okyere said it was humbling to know that his fellow compatriots believed in what he was doing together with his team and acknowledged that his success or failure would be a lesson to others who believed it was time for Ghana and Africans to play major roles in the exploitation of her resources for the good of the people.

He noted that in other African countries such as Nigeria, deliberate policies were rolled out to attract local Entrepreneurs into the upstream sector and today Nigerian companies collectively produce a significant percentage of the country’s daily oil production.

“That is what drives us at Springfield. We believe that after nearly a decade of oil production in Ghana, it is possible for local companies to play major roles in the sector. With the necessary support and resources, we can do what foreign companies supported by their governments are doing here in Africa”.

Nigeria: Dangote Refinery To Be Operationalised In 4Q 2020