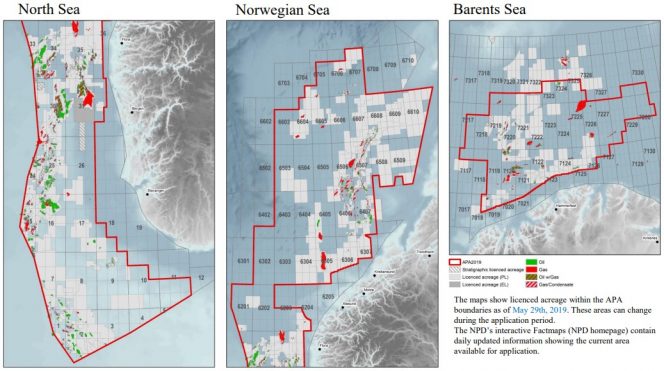 The Norwegian Ministry of Petroleum and Energy on Wednesday announced the APA 2019 licensing round, comprising the predefined areas with blocks in the North Sea, the Norwegian Sea, and the Barents Sea.

The award in predefined areas round is one of two equal licensing rounds on the Norwegian continental shelf. The scheme was introduced in 2003 to facilitate exploration in geologically mature parts of the Shelf.

Norway’s Minister of Oil and Energy Kjell-Børge Freiberg said: “We are continuing our practice of offering regular concessions on the NCS to provide the industry access to new acreage. Awarding prospective acreage is a central element in the Government’s policy. I believe the oil companies are well motivated to continuing exploring the NCS.”

The application deadline for the APA-2019 is 12:00 on August 27, 2019. The Ministry stated that the aim was to award new production licenses in the announced areas at the beginning of 2020.

The predefined areas (APA acreage) has been expanded by a total of 90 blocks – five in the North Sea, 37 in the Norwegian Sea, and 48 in the Barents Sea.

“The expansion of the APA-area is important to ensure effective exploration of larger parts of the NCS, including the Barents Sea. The expansion will give the companies access to new opportunities that can enable value creation, employment and technology development,” Freiberg added.

The APA area includes the geologically most mature parts of the Norwegian continental shelf. Exploration mainly focuses on smaller discoveries that would not justify an independent development but may be profitable if developed in conjunction with other discoveries or utilizing existing or planned infrastructure.