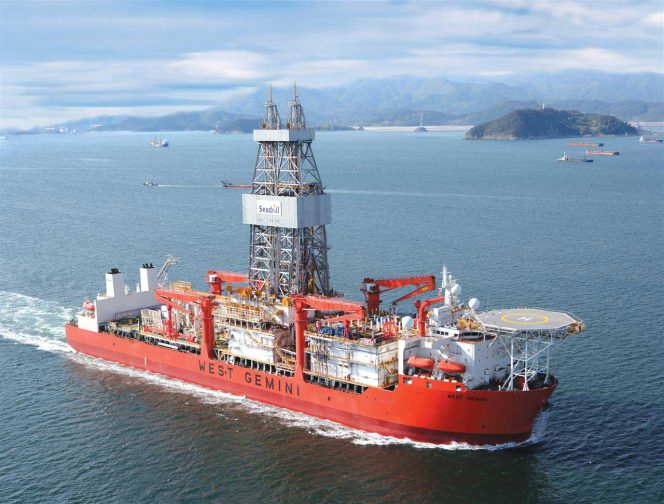 The company has also revealed it has secured more work for its rigs. Seadrill on Thursday posted a net loss $296 million, on total operating revenues of $302 million for the first quarter of the year, compared to previous year’s loss of $203 million.

The numbers look better when compared to the previous quarter (4Q 2018) where Seadrill had posted a net loss of $360 million on Total operating revenues of $292 million.

The company has also revealed it has secured new contracts. Namely, Seadrill’s West Telesto jack-up was awarded a six-firm plus two option well contract in Malaysia with an unnamed customer.

The contract award included mobilization revenue of $1.8 million. The West Carina, built in 2014, is the 6th generation ultra-deepwater drillship. It expected to start work in Brunei in direct continuation of its existing contract with Petronas in Malaysia.

Seadrill has also said that the West Gemini drillship would stay busy with ENI in Angola for a bit longer.

“The West Gemini will complete an additional well in Angola keeping the rig employed into June 2019 adding approximately $6 million in backlog,” Seadrill said.

Furthermore, Seadrill has said that the contracts for the eight jack-ups with Dalian shipyard “have now all been canceled and we have no remaining newbuild commitments.”

Anton Dibowitz, CEO, commented: “We continue to see increased contracting activity in the deepwater market, in many instances with improved contract terms such as mobilization payments and certain capex being paid for by the customer. While the spot market for short term work remains competitive, we are starting to see improvements in rates for longer-term work.

To remind, Seadrill has recently entered into agreements in Qatar and Angola which should see up to eight of its rigs employed.

In February, Seadrill established a 50:50 joint venture with Sonangol called Sonadrill, to operate four drillships, focusing on opportunities in Angolan waters. Each of the joint venture parties will bareboat two drillships into Sonadrill and Seadrill will manage and operate all the units.

“We continue to work with Sonangol to secure contracts for these units,” Seadrill said without disclosing which rigs Seadrill will contribute to the JV.

Also, as recently reported, Qatar Petroleum has awarded 6 drilling contracts to Gulf Drilling International Ltd (GDI) in connection with its North Field expansion project. Seadrill has an existing Strategic Cooperation Agreement (SCA) with GDI under which one rig is currently operating in Qatar. The Company is working with GDI to finalize an agreement to provide up to 5 additional Jack-up rigs under the terms of the SCA.

“We believe this is an attractive opportunity that will further strengthen the relationship between the parties and positions us well for future work in Qatar,” Seadrill said.