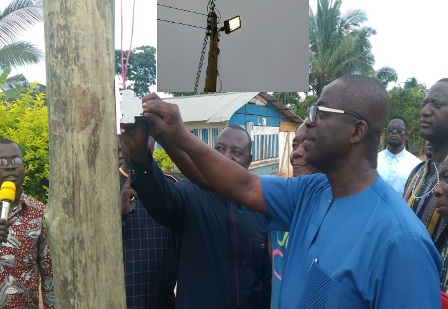 Hon. William Owuraku Aidoo, switching the light on to officially commission the project

About twenty-five communities in the New Abirem District in the Eastern Region have been hooked on to the national grid.

The $2.3 million rural electrification project benefited communities including Koti Ye Aboa, Etwe NimNyansa and Hwoa Ye Mmobo, all areas which gained popularity in the media last year when former Energy Minister, Boakye Agyarko, mentioned them on the Floor of Parliament in response to a question by MP for that area on when the towns would be connected to the national grid.

Interestingly, barely one year on, these towns are now connected to the national grid.

The $2.3 million project is expected to benefit over 2,000 inhabitants of the area.

Addressing the chiefs and people at separate durbars at Koti Ye Aboa and Abohema, the Deputy Minister for Energy in-charge of Power, William Owuraku Aidoo, who commissioned the project, advised the people to take advantage of the opportunity government had offered them to create jobs and employment opportunities for the youth.

He said the connection of the communities to the national grid would pave way for many development projects to be established for the people, saying government was committed to ensuring universal access to electricity in the country.

He urged the people to pay their bills promptly so that more revenue could be generated to extend power to other communities in the country.

The Member of Parliament for the Abirem Constituency, John Osei Frimpong, said 17 communities which included Tawiakrom, Obuo Betwao and Mampong, which were not part of the first phase, would be captured in the second phase.

He said a lot of development projects were being initiated in the district in the areas of education, health and sanitation to help improve the livelihood of the people.

The Birim North District Chief Executive (DCE), Nana Raymond Damptey, urged the communities to make the best use of the power to benefit them economically.

He advised parents in the area to ensure that their children used the lights to study and not to focus on entertainment programmes on television, which could affect their education.

The Eastern Regional Marketing Manager of the Power Distribution Services (PDS), Ghana, Abraham Lincoln, advised the people to use the power economically to avoid exorbitant bills.

The Chief of Pankese, Nana Dr Boakye Darkwa III, commended the government for the project and highlighted on some challenges facing the area as schools, bad roads and lack of health facilities.

The Odikro of Koti Ya Aboa, Nana Kofi Marfo, expressed the hope that the electricity would enable students in the area to study and improve on their performance to enable more young people from the area to get to the tertiary level.