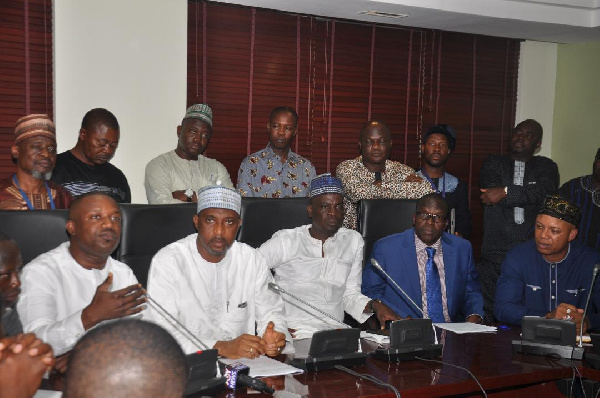 The Minority Caucus in Ghana’s Parliament is asking government to withdraw the re-negotiated petroleum agreement it is signing with AGM/Aker Energy, explaining that “It is inimical to the interest of the state.”

Describing the proposed re-negotiation as “blatant mismanagement of the nation’s critical national resources,” the NDC Caucus called further on Civil Society and well-meaning Ghanaians to resist it, as it could short-change the citizenry.

The Minority, led by its Leader and MP for Tamale South Haruna Iddrisu, addressing a news conference, at the Parliament House, in Accra, urged the governing New Patriotic Party (NPP) to negotiate petroleum agreement that would ensure maximum benefits from the country’s petroleum resources.

The News conference, attended by Second Deputy Speaker Alban Sumana Bagbin, came moments before the House was to adopt a motion on a Mines and Energy Committee Report on the Amendment number one to the Petroleum Agreement relating to South Deepwater Tano Contract.

Mr Iddrisu recalled that Ghana’s stake of 43 per cent under the agreement executed in 2013, under the John Mahama led NDC, between the Government of Ghana, through the Ghana National Petroleum Corporation, GNPC Explorco on one side and AGM Petroleum Ghana Limited, is to be reduced to 18 per cent under the proposed re-negotiated deal, in the present Akufo-Addo led NPP.

“The impact of the “sell-off from AGM/Aker Energy is huge; a potential loss of over 250 million barrels of recoverable oil production equivalent (net to Ghana), which is almost the size of the entire Jubilee Field,” Mr Iddrisu cautioned.

The Minority Caucus questioned why the new proposed deal was being rushed through Parliament, and described the “re-negotiation as a rip-off especially as the GNPC has already invested over $30 million in acquiring data and reducing exploration risks over the Block, thus making it attractive prior to the entry of the AGM/Aker Energy into same Block.

“Additionally, there is the commitment by the AGM/Aker Energy to pay for (or carry) GNPC on the costs of the first two exploration wells which the current government led by President Nana Akufo Addo is forfeiting.

“This amounts to the forfeiture of free funding of about $62 million,” Mr Iddrisu said.

Quoting Article 268 of the 1992 Constitution of Ghana, the Minority Leader wondered if Parliament would get the required number of two-thirds of members in the House to endorse the proposed re-negotiated agreement.

The said provision stated that any transaction, contract or undertaking involving the grant of a right or concession by or on behalf of any person including; the Government of Ghana, to any other person or body of persons howsoever described, for the exploitation of any mineral, water or other natural resource of Ghana made or entered into after the coming into force of this Constitution shall be subject to ratification by Parliament; Parliament may, by resolution supported by the votes of not less than two-thirds of all the members of Parliament, exempt from the provisions of clause (1) of this article any particular class of transactions, contracts or undertakings.

Against a stake of royalty 10 per cent, GNPC carried interest rate: 10 percent; GNPC additional interest 15 percent and GNPC Explorco: 24 per cent; the Minority Leader said the existing Petroleum Agreement (PA) gave Ghana a potential 43 per cent stake, made up of Carried and Participating Equity Interests of 24 per cent of the remaining 75 per cent.

He pointed out that the new terms of the agreement, which he said was hurriedly presented to Parliament for ratification, had royalty: 10 per cent, GNPC Carried Interest: 15 per cent; GNPC Additional Interest: 3 per cent; GNPC Explorco: 0 per cent.

“From the foregoing, this re-negotiated agreement is a complete rip-off, a betrayal of the people’s trust bestowed on this NPP Government,” the Minority Leader said.

According to the Minority Caucus, former Energy Minister Boakye Agyarko declined a similar request from the Aker Energy Group, on the basis that the terms were detrimental to the national interest, and therefore wondered why the current Minister. Mr Peter Amewu would accept the agreement, accusing him of doing that for political expediency.

Mr Iddrisu questioned whether enough checks on the background of a one-month company called Quad Company Limited, the local partner, with five equity at stake.

“Clearly, this is an attempt by some unknown hands to hijack the process and introduce entities without the requisite financial and industrial experience,” the Minority observed.

It called for the rejection of the proposed re-negotiated AGM/Aker Energy agreement, withdrawal re-negotiation for better agreement before it would be ratified by the House.